“Dieter Hempelmann made the life of others better.” 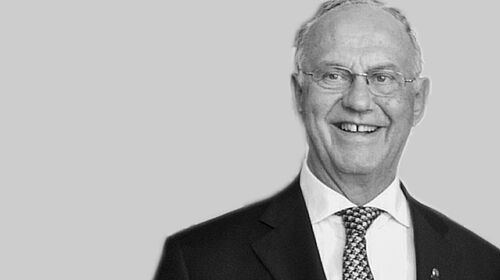 Deeply saddened, we say goodbye to our former managing director and advisory board chairman of many years, Dieter Hempelmann.

We have lost an exceptional person who had a lasting influence on our company. It was with great sorrow that we received the news of his passing. Dieter Hempelmann devoted himself heart and soul to Big Dutchman for more than 50 years – first as a sales manager for the Near East, and from the 1980s as managing director in Germany.

His name will remain inseparably attached to the formation of our network in Eastern Europe after 1989. “DH” was all on his own in the beginning. With a clear strategy, great personal passion and a keen understanding of the countries and people of the CIS, especially Russia, “DH” created a very successful organisation with many bases and customers from Moscow to Belgorod and Saint Petersburg all the way to Volgograd or Novosibirsk.

He received multiple official awards as “promoter of Russia” from the highest government offices in the country. Pushing and promoting was also his motto in personal interactions with his employees, who valued him very much and who he never deserted.

Dieter Hempelmann made the life of others better. We bow to his life achievements and, with much respect and gratefulness, say goodbye to a man with a powerful character, a pronounced sense of responsibility and a humorous as well as convivial personality.

He will be remembered with gratitude forever.

Management and staff of the Big Dutchman group