The Cassanyé family is a first-rate pig producer. The new pig house emphasises this: It is not only an eye-catcher, but also houses very modern equipment. 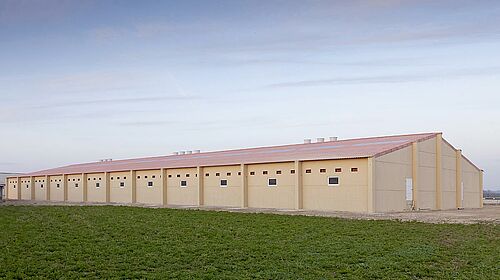 HydroAir liquid feeding system: View of the feed kitchen for the nursery 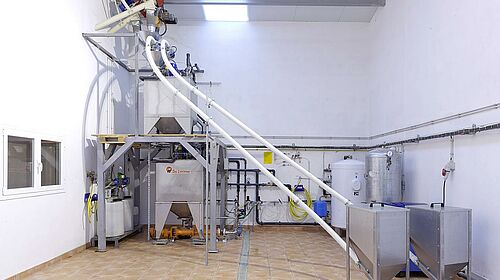 The gestation area for pregnant sows is flooded with light. 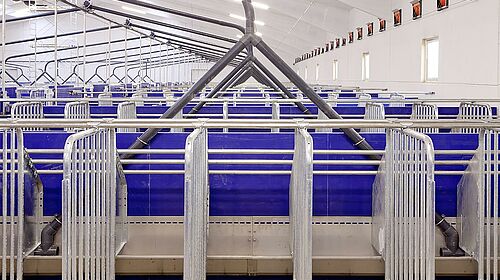 The pig finishing pens are equipped with longitudinal troughs. Naturally, feeding time is followed by a siesta.

The Cassanyé family is a first-rate pig producer. The new pig house emphasises this: It is not only an eye-catcher, but also houses very modern equipment.

HydroAir liquid feeding system: View of the feed kitchen for the nursery

The gestation area for pregnant sows is flooded with light.

The pig finishing pens are equipped with longitudinal troughs. Naturally, feeding time is followed by a siesta.

Catalonia, one of the autonomous communities of Spain in the north-east of the country, has much to offer. Its beautiful beaches and the capital Barcelona are visited by many tourists every year. What most of them do not know: The Catalans are very successful pig producers. This is not only proven by the many farms breeding the Iberian pig in the region around the city of Lleida. A large percentage of the Spanish pig stock is produced in Catalonia, some of it by first-rate farms who are breeding on European top levels.

A prime example: The Gescaser farm of the Cassanyé family in the province of Lleida. The family started keeping pigs in 1977. Since then, the farm has grown continuously. Today, it houses 1,700 sows in a closed system. An excellent performance of 32.38 weaners per sow and per year in 2014 was recognised with the much sought-after "Porc d'Or con Diamante", which is awarded annually for outstanding achievements in pig production. The Porc d'Or is sponsored by the Spanish Department of Agriculture and the Catalan agricultural research institute IRTA (Instituto de Investigación y Tecnología Agroalimentarias).

Antonio Cassanyé has experienced first-hand how much work went into the farm before its results were honoured with this award. "We continuously analyse production flows in our pig houses in a very detailed manner. The feeding system is a very important factor in this regard," the managing director explains one of the recipes for success. The Gescaser company had started to feed all animals with liquid feed as early as in 2006. One of the advantages for the family business, which also cultivates its own land: The home-grown maize is ground and fed to the pigs as corn cob mix (CCM), which helps reduce costs.

In addition to the housing equipment, the liquid feeding systems for 1,700 sows, 6,600 spaces for weaners and 7,500 finishing pig places have been provided by the German pig equipment supplier Big Dutchman. Two HydroMix liquid feeding systems supply the sows and finishing pigs with feed. In the service centre, the gestation area with group pens and in the finishing house, the feed is dispensed into longitudinal troughs. In the farrowing area, each sow receives her feed individually in her farrowing pen.

For their nursery, the Gescaser company decided to install the innovative HydroAir feeding system. The advantages of the Big Dutchman sensor feeding system, developed specifically for piglet rearing, are obvious: Thanks to the fact that HydroAir uses compressed air, even the smallest portions of feed are transported to the trough without residues and dispensed here. The feed lines therefore remain free of feed remnants.

Antonio Cassanyé states that of course, the system requires much management know-how from the staff. "However, the system is very easy to operate after some specific and individual training. It has clearly proven its worth," states the managing director, who is very pleased with eight successful years of liquid feeding courtesy of Big Dutchman.