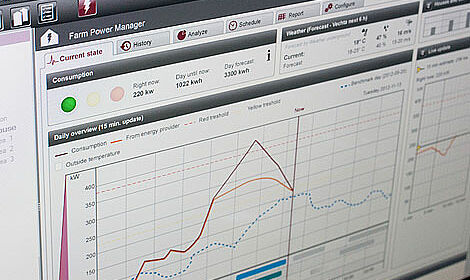 Energy is becoming more and more valuable, using it efficiently and economically is therefore becoming more and more important – especially in agriculture! The new Big Dutchman FarmPowerManager helps managers of agricultural operations to identify the savings potentials on their farm and thus save money. FarmPowerManager is the first energy management system for livestock producers: with a PC program which centrally collects information about the consumption of electrical energy and concisely displays the relevant data. The user-friendly system analyses rate-based costs in real-time and calculates forecasts of future consumption. This way energetic weaknesses can be identified and the production can be optimised in regard to cost-intensive energy peaks.

The Big Dutchman-Software combines multiple data sources. This includes the energy consumption of individual processes in the house, but also the consumption of entire houses or of an entire farm complex. These are combined with data such as type, number or age of the animals so that the consumption data per animal, per house or per system or farm can be compared on a mutual basis. It is furthermore possible to record and integrate meteorological data, data from climate sensors or the energy produced on the farm, for example from wind or solar generators or a biogas plant.

Based on freely-selectable limit values, the FarmPowerManager allows the farm manager to switch off irrelevant devices or switch to generator-powered operation. This makes sense to save costs especially in case of energy rates which are based on the consumed peak load.

It is furthermore possible to conduct profitability analyses based on the consumption thus enabling the farm manager to plan for an energetically optimised future.

The FarmPowerManager is characterised by its simple menu navigation and a clear design. The system also supports the standardized ISOagriNET-interface which makes it possible not only to integrate Big Dutchman control computers but also other computers.

The Big Dutchman FarmPower-Manager was awarded a silver EuroTier Innovation Medal by an international expert commission of the “DLG” (German Agricultural Society)  in the forefront of the show. Hall 9, Stand C24 / Hall 11, Stand D21