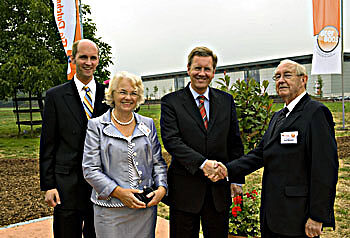 A fun anniversary celebration: Relaxed atmosphere in the marquee. 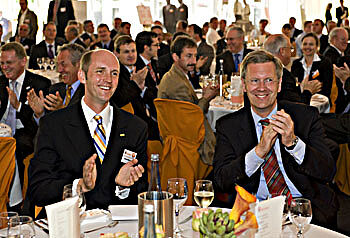 A fun anniversary celebration: Relaxed atmosphere in the marquee.

In these past few days, Big Dutchman has celebrated a double anniversary: 70 years of BD worldwide and 50 years in Germany and Europe. On the occasion of this double birthday, the festivities started with an official reception for more than 500 customers and guests from all areas on 4 July 2008. Even Lower Saxony’s prime minister Christian Wulff took this chance to personally congratulate the company. „Big Dutchman is a company that Lower Saxony has every reason to be proud of“ said the guest of honour. 97-year-old Jack De Witt, one of the Big Dutchman's founders, sent his congratulations from the USA.

In a gripping speech, Big Dutchman CEO Bernd Meerpohl thanked his employees, business partners as well as partners from the local government for the great team-work during the last years. But before anyone else, he especially thanked his parents: „You are an excellent team and you succeeded in creating a company that most people today are happy and proud of to be working in“. In regard to the future, he gave an optimistic outlook: „Our most important principle remains the topic of customer-oriented business. And we want to be a step ahead of the industry and create our own sales market” was how the Big Dutchman CEO described his vision.

Uwe Bartels, mayor of Vechta and former Minister for Agriculture in Lower Saxony, conveyed greetings from the 33,000 citizens of Vechta. Bartels stressed, that even though Big Dutchman had become a global player, it was still very much a family enterprise. And added: „It is thanks to businesses from this area, such as Big Dutchman, that Vechta has become such an economically strong region with a high quality of life”.

State prime minister Christian Wulff used his speech to express his admiration for Big Dutchman’s accomplishments: „You have contributed significantly to the technology of livestock management”. And he praised the company as a family enterprise with worldwide recognition that accepts the responsibility for his employees. “We should publish an add with Big Dutchman: while others cackle, we lay eggs" joked the state prime minister.

The foundation for 70 years of Big Dutchman was laid in the USA in 1938 by the DeWitt brothers Jack and Dick. They introduced the world’s first automatic poultry feeding system. In 1958, Josef Meerpohl from Vechta-Calveslage in Northern Germany took over as sales agent for Germany. In 1985 he acquired the whole company through a management byuout (at that time this did not include the sales rights for North and South America). 70 / 50 years later, the medium-sized family enterprise presents itself as the world’s largest supplier for modern pig and poultry equipment. The company has customers in more than 100 countries and had a turnover of 450 million euros in the past financial year. In the last two years Big Dutchman invested more than 60 million euros. With 35 million euros, the largest share of investments was made at the headquarters in Calveslage. Meanwhile the company employs 1,500 people worldwide, 550 in Calveslage alone.

The family enterprise finished off the festivities with a large party for staff and guests in combination with the 5th international agents' meeting that was hosted for Big Dutchman agents from all over the world.