Impressive farm in Eastern Spain: Sinarcas, not far from Valencia, a seaport on the Mediterranean Sea 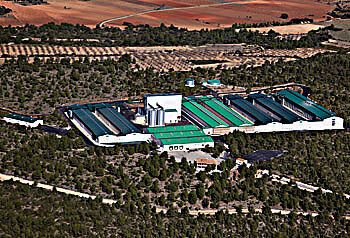 One million bird places seen from high up; at the extreme right, the probably highest laying installation in the world.

If outside temperatures exceed 300C, the Pad Cooling system is applied

Impressive farm in Eastern Spain: Sinarcas, not far from Valencia, a seaport on the Mediterranean Sea

One million bird places seen from high up; at the extreme right, the probably highest laying installation in the world.

If outside temperatures exceed 300C, the Pad Cooling system is applied

Grupo Avicola la Cresta, one of the most important Spanish egg producers, has increased its bird number in a spectacular way: 150,000 laying hens distributed on seven rows and impressive twelve tiers with two intermediate ceilings. As the bottom line this is likely to be the highest laying system world-wide. The farm reaches a total bird number of 1 million due to this new house and is thus counting among the largest and most modern installations in Spain. The new house equipped according to the new EU guideline for laying hens valid as of 2012 is located in the town of Sinarcas in Eastern Spain, not far from Valencia, a seaport on the Mediterranean Sea. The new guideline for laying hens, difficult environmental conditions in the area, an unusual size as well as the desire to build the house turn-key caused the project managers to join forces with Big Dutchman, a specialist for which the respective know-how is everyday business.

Grupo Avicola la Cresta has decided to install EUROVENT EU as the housing system for layers. Big Dutchmans’ furnished manure belt battery corresponds fully to the new regulations of the EU-directive 1999/74 regarding surface, system height and equipment as e.g. nest and litter bath. This way, the Lower Saxony equipment supplier successfully balances the egg producer's request to house the birds in an animal-friendly way and at the same time to produce eggs effectively as well as hygienically.

Laying performance and animal health are further positively influenced by a tailor-made lighting system optimally controlling the daily rhythm of the laying hens: Tube lamps protruding vertically into the aisles at regular intervals ensure a uniform distribution of light. Since the tube lamps are installed in front of the litter area, the nest itself is located in the dark so that the laying hens remain undisturbed during egg deposit. Upon moving the birds in, the lamps can be winched up manually or by motor. A dimmer simulates the different phases of day and is adjusted centrally by means of a sunlight simulator.

CombiTunnel ventilation for a favourable house climate at all times

Despite the frequently adverse weather conditions at Sinarcas with temperature differences up to 55 degrees between the extreme temperatures in summer and in winter ensuring a favourable house climate is no problem for Big Dutchman. The positive results are healthy birds, high production results at all seasons as well as an excellent feed conversion. The reason: The innovative, proven CombiTunnel ventilation from the largest equipment supplier for modern pig and poultry equipment combines two different ventilation systems: At low outside temperatures ventilation is switched to side mode creating a stable negative pressure ventilation with very uniform temperatures in the entire house by an intelligent interaction between intake air and exhaust air elements as well as heating systems. At high outside temperatures, however, ventilation operates in tunnel mode – high air speed at bird level as well as the use of the wind-chill effect ensure significant cooling with low energy consumption. The air can be cooled additionally by means of the Pad Cooling system. Of course, a smooth transition between side mode and tunnel mode and vice versa are possible in addition to a modification in temperature.