Montana, USA: Another 2500 sows will move into group gestation pens

Sow management: Preparing for the arrival of 36 electronic feeding stations

The new gestation barn for Hillcrest Colony will be ready for the new herd of sows in October 2010. 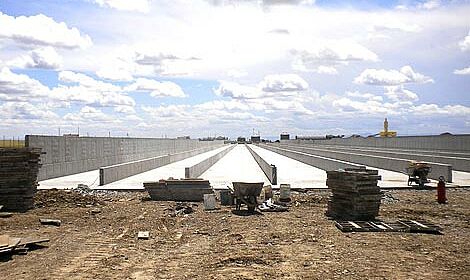 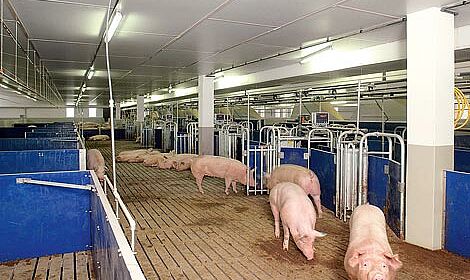 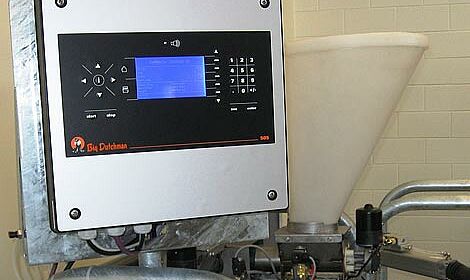 Ready for shipment from Germany: 36 Big Dutchman "CallMatic 2" feeding stations and 17 heat detection units are loaded into the containers,… 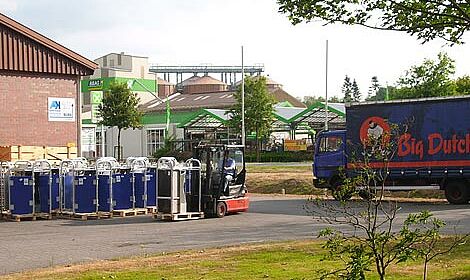 The loading of the electronic sow feeding systems is supervised by product engineer Karsten Fuchs (second from left) and product manager Daniel Holling (far right) himself. 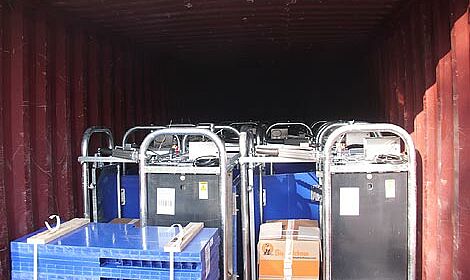 The new gestation barn for Hillcrest Colony will be ready for the new herd of sows in October 2010.

Ready for shipment from Germany: 36 Big Dutchman "CallMatic 2" feeding stations and 17 heat detection units are loaded into the containers,…

The loading of the electronic sow feeding systems is supervised by product engineer Karsten Fuchs (second from left) and product manager Daniel Holling (far right) himself.

More and more large US hog farms are planning to switch from conventional (single animal) gestation crates to group housing of sows. The evidence of good productivity and better sow management opportunities has not only been provided by scientific research but also by satisfied producers who have learned to manage electronic sow feeding (ESF) very successfully.

The new farm near Great Falls, Montana, USA, will belong to a young Hutterite colony which will separate from the mother colony as soon as all farm buildings and homes at the new location are ready for them. It is typical for Hutterite colonies to branch off and relocate a portion of their families when populations get too big. The hog operation at Hillcrest will be the first part of the new farm to go into operation in October.

Hillcrest farms have the rare opportunity to make plans from scratch for their new farm operation. The Hutterite 'hog bosses' are able to base their decisions for future production methods and for the type of housing and feeding equipment to be installed entirely on what they believe is the best technology available to be most profitable.

In respect to the gestation barn, the Hutterites – who are known to prefer most up-to-date and top-of-the line technology in their barns – chose to go for group housing of sows and implement the electronic sow feeding system CallMatic 2 from Big Dutchman.

The Hillcrest sow operation will manage 2,500 sows and produce about 65,000 piglets per year. To accommodate these by the fall, the construction of 3 large hog buildings is well on its way. The farrowing building will include 8 farrowing rooms with 60 crates per room and a gilt training area for the ESF system. The gestation barn is a 780 feet long building and will include 17 group gestation pens as well as the breeding pens with stalls for sows and boars. As Hillcrest Colony prefers natural breeding, there will be approximately 144 boars 'on duty'. A third small building will function as a gilt isolation barn with 180 gilt and 22 boar spaces for incoming new animals.

The 17 gestation pens will house 120 sows each. Every pen will be equipped with two CallMatic 2 feeding stations, 3 partly secluded resting areas and an automatic heat detection unit situated by an integrated boar pen.

The Big Dutchman electronic sow feeding system will be run by the new "BigFarmNet Technology" software with one central computer and the separate "505" controllers at each feeding station. This set-up has significant advantages, because it allows direct access to the controls and to all data at each station. This unquestionably adds to the safety of such a large feeding system. Should the PC or network ever break down for any reason, the feeding stations will still remain fully operational as the controllers have their own data memory and are connected with one another.

Big Dutchman is one of the pioneer developers of electronic sow feeding systems. The first systems were installed in Europe in the early 80′s. Since then, group housing of sows has become more and more popular and the Big Dutchman CallMatic 2 system can be found in many small or large sow farms all over the world. But Hillcrest Colony - with 36 feeding stations in a single barn, will be one of the biggest ESF projects Big Dutchman has done so far. Daniel Holling, product manager for ESF systems at Big Dutchman in Germany, feels "proud and very happy to be able to introduce group housing to the large hog producers in the US and we are absolutely confident that Hillcrest will be very satisfied with the results."

When the containers arrive in Montana, Big Dutchman will have an expert team of technicians both from Germany and from Big Dutchman Inc. of Michigan that will supervise the installation and the start up of the automatic feeding system. While it doesn't take long to get a system ready and running, Big Dutchman does take time and great care in teaching sow management skills for group housing of sows as well as training to utilize the software and all automated procedures so as to ensure best possible operation and satisfaction for both stockmen and sows.