“Not the largest, but the best”

Sow management: View of an extremely successful farm project. The third filter bank of the exhaust air cleaner, made of burl wood, can be seen on the right and the left at the front end of each house. 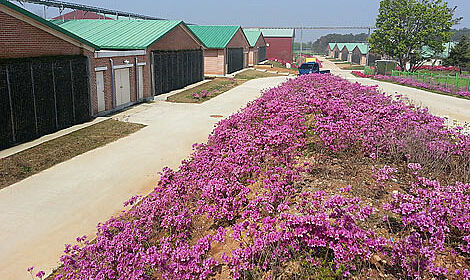 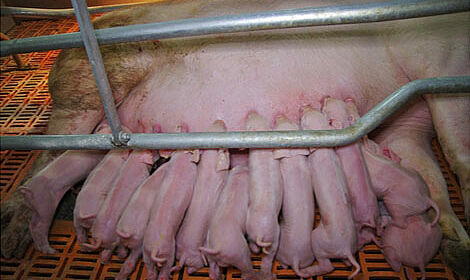 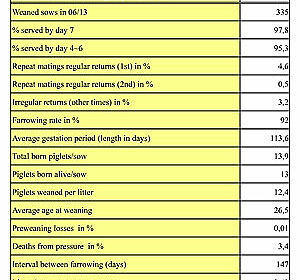 At the inauguration Mr Kim (on the very right), chairman of Harim Group, shows the guests around the service centre. 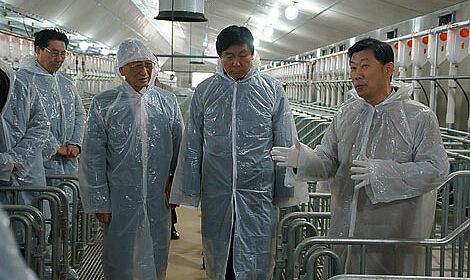 Young-Il Cho (3rd from left) is explaining how the exhaust air washer MagixX is works. 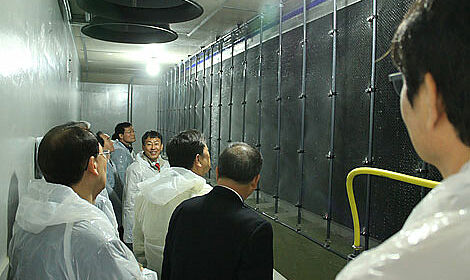 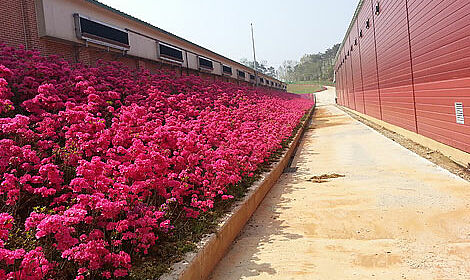 Sow management: View of an extremely successful farm project. The third filter bank of the exhaust air cleaner, made of burl wood, can be seen on the right and the left at the front end of each house.

At the inauguration Mr Kim (on the very right), chairman of Harim Group, shows the guests around the service centre.

Young-Il Cho (3rd from left) is explaining how the exhaust air washer MagixX is works.

The past decade has seen changes in the South Korean pig industry landscape. From more than 12,000 pig farms in 2005, the number declined to 6,000 in 2012. Despite this, total pig inventory in the country has gone up to almost 10 million heads from roughly nine million heads during the same period, evidence of the growing efficiency and productivity of the country’s pig producers.

These days, achieving 22 pigs per sow per year (PSY) is a cinch for many of the country’s pig farmers, but for Bongdong Agri Co Ltd, which belongs to the Harim Group, 30 PSY is now a reality.

“Our goal is to become one of the best farms in the world,” said Bongdong President Young-Il Cho.

Toward this end, the company inaugurated a brand new 3600-sow farm in Nonsan-si, Chungcheongnam-do Province in May 2012. Present were Mr. Seo Gyuong, Minister of Agriculture for South Korea as well as Mr Hong Kuk Kim, chairman of the Harim Group and Mr. Hak-Sang Chung, president of Harim Group subsidiary Farmsco.

While the farm was in the planning phase, Mr Cho left nothing to chance. A practical and thorough man, he visited farms and equipment suppliers all over the world. His favoured destinations, however, were Denmark, Germany, France and the Netherlands.

This is hardly surprising, as some of the best-performing sows in the world can be found in Europe, and they have the standard he sought. “We do not want to be the largest, but the best,” said Mr Cho. His ambitious goal: A productivity of 30 PSY.

“We carried out thorough market inspections of the European hog industry. At the end of the trip, we decided to get all our genetics and equipment from European companies,” he pointed out.

From all indications, he made the right choice. After only a year, his goal became reality: In Nonsan-si 12.4 piglets weaned per litter and 2.42 litters per sow per year result in 30 PSY. Only the best pig breeders in the world achieve such outstanding results.

Even with this major accomplishment under his belt, Mr Cho not willing to rest. “In the future we will strive to increase our pigs PSY,” he declared.

Mr Cho attributes his success to strict compliance with his management motto ‘Keep to the basics!’ His motto stands for a consistent and daily application of the best practices for sow management by his excellently trained farm team.

In this he was supported by GENE+, a French pig breeding company which provided the genetics (GGP, GP & F1) and technical-genetic assistance to the Nonsan-si farm. Its experts undertook a comprehensive and thorough training of all Bongdong team members involved in the management of the sows, which were shipped to the country aboard four chartered jumbo jets.

The results achieved by Mr Cho made the South Korean experts sit up and take notice. According to him, other pig producers with similarly sized farms are interested in the genetics and farming equipment he uses.

In addition to excellent genetics, however, farm management also plays a key role in Bongdong’s success.

The climate in South Korea is always a major obstacle to achieving good pig production results, with hot and humid summers and humidity of up to 96% as well as cold winters during which temperatures may drop to -15°C.

To address this problem, Mr Cho turned to German pig equipment supplier Big Dutchman and tapped the company’s expertise for his project. Big Dutchman has been furnishing houses worldwide for decades and can thus provide solutions for various climatic conditions.

After studying all possibilities, Mr Cho decided in favour of cross ventilation. Under the system, fans draw fresh air through the whole house and create a pleasant windchill effect. Cool pads installed in front of the inlets further support the cooling.

To ensure that temperatures and air quality are ideal for the sows, the climate in the house is controlled by the BigFarmNet technology. This control allows for permanent data acquisition and monitoring of each house in real time.

In addition to the climate control system, all the equipment installed in Bongdong’s Nonsan-si operation is from Big Dutchman. These include all housing and feeding systems as well as computer installations, from the exhaust air cleaners to the BD Space or BD Swing crate stands, from the DryRapid dry feeding system to the silos.

Good genetics and equipment alone however, are still not enough to ensure success, and no one knows this more than Mr Cho. To fully achieve his goals for the farm, he has implemented a holistic production strategy that encompasses genetics, nutrition and feeding strategy, environment control and efficient farm management, manpower management and training.

Mr Cho cites as another reason for the outstanding productivity of his sows, the numerous hygienic measures applied on the farm. Strict and comprehensive biosecurity measures are in place both for farm staff and farm visitors.

Meanwhile, with South Korea being one of the most densely populated countries in the world, it is important to Mr Cho that he is on good terms with the neighbours of his farm, so from the beginning, he was always considerate of them and remains so.

Remarkably, the premises in Nonsan-si, only 30km southwest of the city of Daejeon with its 1.5 million inhabitants, are nearly completely clear of odours, thanks to 17 MagixX exhaust air cleaners scattered around the farm that remove ammonia, dust and odours from the exhaust air.

Mr Cho's happy reaction to the high separation rates: “I am perfectly satisfied with the results.”

As the South Korean pig industry continues to develop, the government has put in more regulations to ensure not only food safety but animal welfare and environment conservation as well.

This, said Mr Cho, will affect the industry and will likely bring down further the number of pig producers. That said, Bongdong now serves as a role model for the country’s pig industry as to what can be achieved with modernisation and efficient production.

And while Bongdong is not yet a player in the world market, it is not inconceivable that it may be in a few years.

“I haven’t had time to consider it yet, but it is something that we will consider in the future,” Mr Cho remarked.