LED lamps for poultry growing – the dimmer is what’s important

Saving money with the new LED technology for poultry houses

Thanks to the LED lamps in his poultry house, Dirk Bockhorst is saving a lot of money after only one year. Daughter Hermine is also happy. 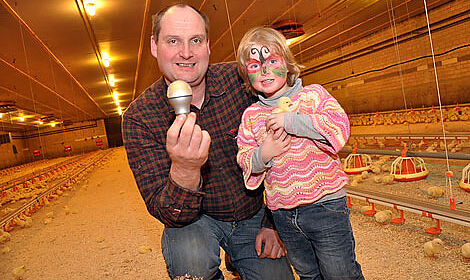 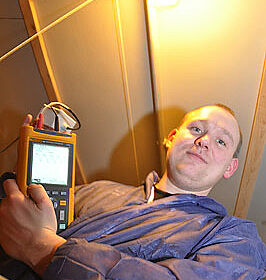 Innovative LED technology for poultry growing: The dimmer controls the lighting steplessly without influencing other components in the house. 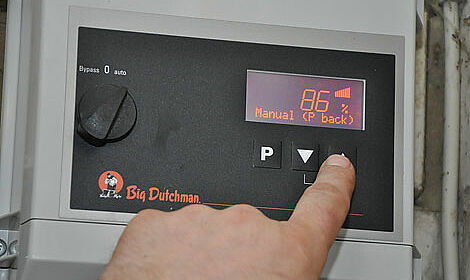 Thanks to the LED lamps in his poultry house, Dirk Bockhorst is saving a lot of money after only one year. Daughter Hermine is also happy.

Innovative LED technology for poultry growing: The dimmer controls the lighting steplessly without influencing other components in the house.

For the broilers on Dirk Bockhorst's farm, the morning starts leisurely. As if the sun were rising, the lights are slowly turned on in the houses located in Emstek, Lower Saxony, Germany. Happy clucking can be heard all around. Until warm light illuminates the houses half an hour later. This light does not come from standard 40 watt light bulbs but is provided by high-quality LED lamps. A special dimmer which ensures that the birds are not stressed and does not interfere with other technologies used in the poultry house is included.

Farmer Bockhorst replaced his light bulbs about a year ago. The old power-guzzling bulbs had to yield and make room for low-energy LED bulbs. One lamp costs more than 20 euros, but the new technology has a significantly longer service life and saves a lot of energy. Bockhorst has amortised his investment after one year already. He spent 4,000 euros on the new lamps – and saved nearly the exact same amount in energy costs up to today. After this first year, he will thus save 4,000 euros annually, increases in the price for electricity not included.

The change-over from old to new required less effort than Bockhorst had expected. “I replaced all light bulbs myself,” reports the 42-year-old farmer. Naturally, the high-quality LED bulbs fit the standard threads for electric lamps used in the poultry house. Big Dutchman supported Bockhorst during the installation of the centrepiece of the new system.

This centrepiece is the dimmer. Without this dimmer, the whole system would not work. Farmer Bockhorst would not save nearly as much money without it. The module is installed in the service room of each house and connected to the farm computer. The computer controls the dimmer and indicates when and with which intensity the lights should be on.

Big Dutchman only sells the LED technology with the dimmer developed in the company’s headquarters in Calveslage. Compared to simpler devices, the Big Dutchman dimmer does not create any flickering so that the animals stay very calm, explains product manager Nils Neugebauer. His team put a lot of effort into the development of the dimmer to ensure that the device does not blow fuses by error or cause PC crashes – a common problem with standard dimmers.

Another unique feature of the Big Dutchman dimmer: It can be controlled steplessly down to 0 percent. This characteristic ensures that additional cost-savings when the technology is used in poultry houses. Most other dimmers turn off at a percentage of 20 to 30, says Neugebauer. This can cause stress for the chickens.

Meanwhile, Dirk Bockhorst's broilers do not even know what stress is. His stock is doing as well as ever after the replacement of the lamps.