Robust and extremely versatile: the Vario 8L volume dispenser can dose from 100 g to 5 kg 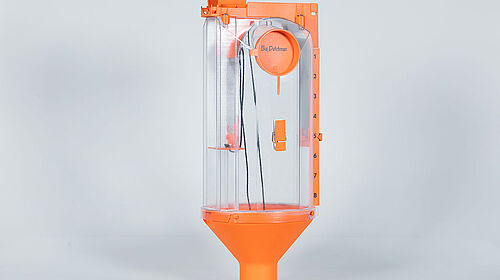 The new Big Dutchman volume dispenser Vario 8L is the first feed dispenser for sows that is available in all required configurations and that can, moreover, dispense small portions of as little as 100 grams of feed just as precisely as larger rations of up to 5 kilograms. This impressive range is made possible by an additional dosing flap for small amounts that can be inserted into the volume dispenser’s filling chute.

“The entire dispenser is very robust and not as prone to issues as the technology that is currently available for feeding of small amounts,” says product manager Dennis Engelking. According to Engelking, no volume dispenser is as versatile as Vario 8L: “We have used a proven actuation and release system and can offer versions for one and two feed lines, lateral or central suspension, an additive flap and a sow card holder as well as a removable lower part that makes cleaning the volume dispenser much easier. The most important feature is, of course, that Vario 8L can dispense small quantities from 100 to 700 grams very precisely.”