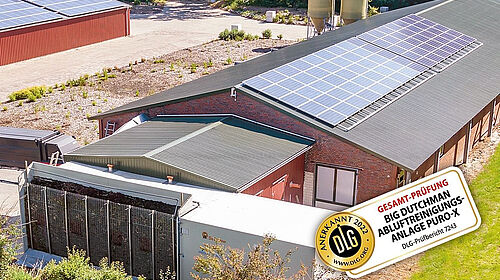 Big Dutchman is happy to announce that within just three months, a second air scrubber has received a quality mark from the German Agricultural Society (DLG). Not only PURO is now certified to carry the renowned “DLG Approved Full Test” quality seal, but also PURO-X, an air scrubber for pig housing on straw. Both scrubbers successfully passed the long-term DLG test.

Roland Tapken: No. The first seal was awarded to PURO, an air scrubber for pig housing without bedding. PURO-X was developed for the Xaletto straw bedding concept.

These are two different areas of use, and the two scrubbers were tested separately.

However, they belong to the same product family and are quite similar in some aspects.

Roland Tapken: Yes. Previously, only systems for classic pig housing without bedding had received the DLG approval. Our air scrubber was the first of the industry to be approved for houses with straw bedding.

Roland Tapken: Xaletto is a new management concept for pig rearing and finishing. The pigs are kept exclusively on straw. The method combines animal welfare with environmental protection while also being profitable.

We developed Xaletto together with the feed producer Bröring from Dinklage and first introduced it during EuroTier 2018.

Roland Tapken: The concept is based on a special ventilation system, a specifically developed feed type, and a compost activator. Thanks to these three components, moisture is constantly removed from the straw bedding.

The central benefit of Xaletto is that no slurry is produced. Of course, all manure can be composted.

Roland Tapken: No. Just like with all other pig housing projects, it depends on the location and on what the expert opinion says.

Roland Tapken: Every number is a measuring result. You could say that PURO-X brought home a very good “report card”. ;-)

The DLG requirements are very exacting. Air cleaning systems must be able to separate at least 70 % of ammonia and dust emissions to pass the usability test at all.

For odours, the requirements demand less than 300 odour units (OU) per cubic metre at all times.

Meeting the requirements is a great success, and we are very proud “parents”. ;-)

Roland Tapken: Certainly. First, you need to know that measurements were taken twice a year, once in summer, once in winter.

Roland Tapken: Correct. The figures above apply to normal operation.

Under specific conditions, our scrubber can be configured in such a way that the minimum separation rate for ammonia after the biological cleaning stage is 85.4 % in the summer and 90.9 % in the winter. Whether this is actually possible must be checked with the operator for each individual case.

Roland Tapken: PURO as well as PURO-X work with both cleaning stages.

I can report a significant difference for PURO-X, however; an innovation for pig production: we have added an upstream dust filter to both stages. This filter removes coarse and fine dust particles from the exhaust air.

Roland Tapken: Yes, indeed. StuffNix is a Big Dutchman dust filter that has been achieving good and reliable results in poultry houses. Why seek far afield when the good is so close by?

Roland Tapken: Of course. The pH value and the conductivity of the PURO-X wash water are better than those of standard filters. This means that fewer residues are produced: farmers pay less for slurry spreading and storage.

Roland Tapken: Yes, quite a lot! This year, four new pig houses will be constructed and equipped with PURO-X.

Additionally, around 30 farmers have indicated that they are interested in building a barn with PURO-X. We are very happy about this, because it means that pig producers continue to plan ahead, despite the difficult situation of the industry.