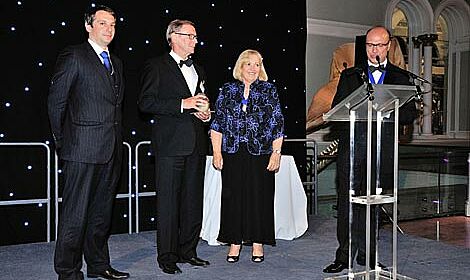 During its Global Leadership Conference in Edinburgh, Scotland, the International Egg Commission (IEC) recently awarded Prof. Dr. Hans-Wilhelm Windhorst their Exceptional Service Award. Professor Windhorst is director of the Science and Information Centre for Sustainable Poultry Production (WING) at the University of Vechta in Germany.

In his laudatory speech, IEC chairman Cesar de Anda recognised Mr. Windhorst’s continued support and dedication as statistical analyst for the IEC. Mr. de Anda detailed that, in the past years, professor Windhorst had worked on 15 extensive publications for the IEC, in addition to numerous scientific essays. Topics included the role of egg production in global poultry farming, an atlas of the global egg production and a historical overview of the past 50 years in the global egg industry.

Cesar de Anda explained that the publications, filled with detailed figures and corresponding analyses, would be of great importance whenever the industry’s companies made decisions on new investments. The forecasts in these publications indicated new trends. Moreover, Windhorst had made the numbers talk in his many presentations and talks and presented and explained global and national patterns and dynamics in egg production and trade to the participants of the conference. His scientific research played a significant role for the IEC today being seen as the international mouthpiece of this important branch of poultry industry.