Pig production made easy thanks to the new BigFarmNet technology. Product manager Daniel Holling explains how exactly this works. 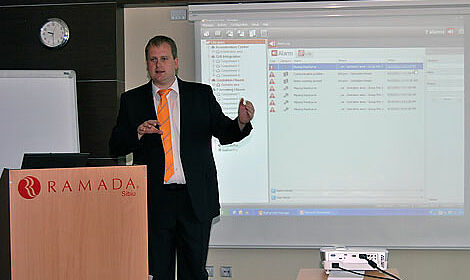 The symposium was concluded with a dinner for all attendees courtesy of Big Dutchman. 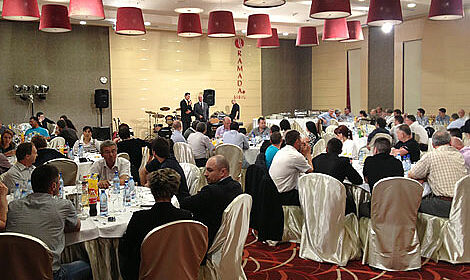 Pig production made easy thanks to the new BigFarmNet technology. Product manager Daniel Holling explains how exactly this works.

The symposium was concluded with a dinner for all attendees courtesy of Big Dutchman.

Many successful Romanian livestock owners have trusted Big Dutchman poultry and pig equipment in the past 20 years. This significant figure was recently the reason for a celebratory symposium in the Transylvanian city of Sibiu. Approximately 130 attendees followed the invitation of the world's leading equipment supplier and looked back on the past two decades. Experienced employees coming from Big Dutchman headquarters in Germany also attended the symposium and presented the newest trends and technologies for pig production and poultry production.

“The event was all-around positive! We were especially happy that many of our old companions were able to be here”, is Dieter Hempelmann’s final statement. Managing director of Big Dutchman for many years, Hempelmann established successful sales and distribution to Central and Eastern Europe and to today still advises the company.

The symposium’s schedule was custom-made for poultry and pig managers. Both focused on profitability and animal welfare. Even though the schedules were tight, attendees had sufficient time to share anecdotes and memories from the past two decades of German-Romanian co-operation.

Change is the only constant

And there were many things to share, considering the fact that Romanian livestock keepers moved from a planned economy to a market economy – a difficult phase in pig production and poultry production, as Big Dutchman employees can testify. They always provided the Romanian businesspeople with help and advice during these trying times.

“Today, the support we give is quite different,” current Big Dutchman managing director Michael Brinkmann states. Not only the political and economic system has been turned upside down in the past twenty years, but Romania’s accession to the EU also brought with it modified regulations regarding pig production and poultry production. “The demand for Big Dutchman technology and knowledge is thus still very high,” explains Daniel Bartels, Sales Manager for pig equipment.


A look into the future of pig production

For the pig keepers’ part of the symposium, BigFarmNet was in the spotlight. With this new technology, all house applications and control computers are included in one single program.

“The Romanian experts immediately understood the significance of BigFarmNet,” notices Bartels. “We finally have a system which easily and efficiently controls and manages pig houses, at one location as well as simultaneously on different farms,” was the unanimous opinion of the attentive audience.

“Another focus was the question of the future,” is Bartels's final review on the successful event: In which direction is pig production moving? What may new developments for increased animal health look like and what can their effects be?

The topic was not chosen without a reason. Big Dutchman’s concept study “Pig Production 2030” had attracted a lot of interest during the major trade show for livestock farming, EuroTier 2012 in Hanover, Germany – including the interest of Romanian experts.

The enthusiasm for the project is hardly on the wane, as the vision dreamt up by Big Dutchman can also be visited in “real life” in a house with 60 sows. What the practical results are, what it means for the piglets to be running around freely and how economic the system is – these and other questions were discussed by the experts in Sibiu.

Central topics of the symposium for poultry managers were Big Dutchman management systems for egg production and solutions for saving energy.