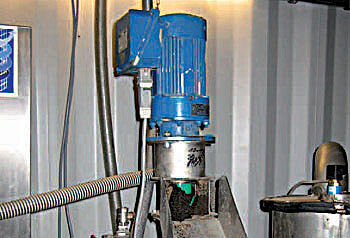 The spiral filter press OptiSep launched by Big Dutchman is a milestone in the development of separators for digestate: contrary to conventional systems, the new separator separates solids and liquids extremely reliably at a cut point of just 0.1 mm. Another novelty: different from the usually horizontally arranged spiral shafts, the spiral of OptiSep runs vertically and does not work against any resistance. As a result, the energy consumption is very low and leakage of unseparated digestate is a thing of the past.

Furthermore, the spiral filter press can be adapted inexpensively if the installation is to be enlarged. The innovation can also be used with digestate of up to twelve per cent dry substance content. OptiSep is composed of few components, robust and insensitive to disturbances.

The spiral filter press, which can also be used to separate slurry, is patent pending.
Back