The American Egg Board has set up their exhibit space in the style of a little farm themed “An egg’s journey from farm to table”. 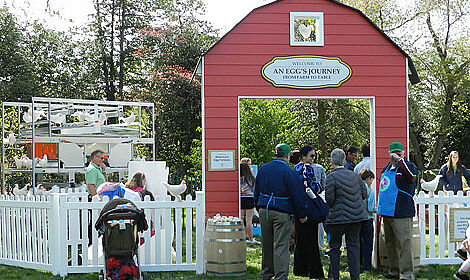 The President is reading an Easter story to the children. 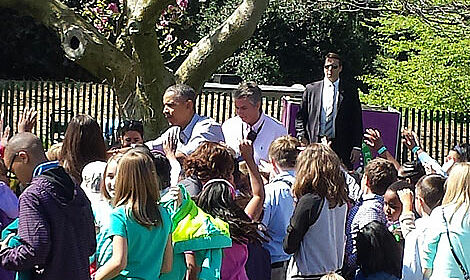 People are waiting in line to see the chicken. 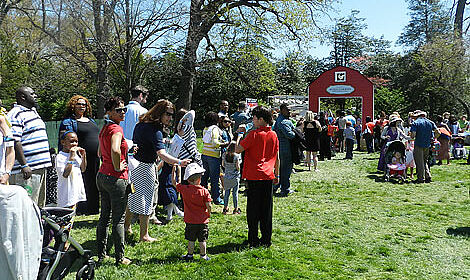 Terry Pollard is deep in conversation with two visitors. 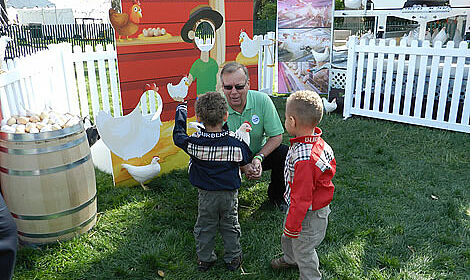 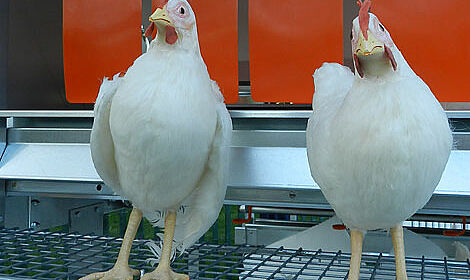 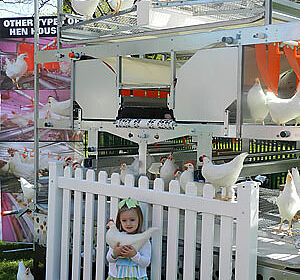 The American Egg Board has set up their exhibit space in the style of a little farm themed “An egg’s journey from farm to table”.

The President is reading an Easter story to the children.

People are waiting in line to see the chicken.

Terry Pollard is deep in conversation with two visitors.

The Big Dutchman Natura Step aviary and the company’s Hollywood Hens have just returned home to Holland, MI, after a visit to the White House. They had been invited to attend the 136th Easter Egg Roll. Terry Pollard, Big Dutchman, Inc. Senior Vice President, Egg Systems USA and Canada, gives his report of a fascinating trip to 1600 Pennsylvania Avenue:

The annual White House Easter Egg Roll (WHEER) celebration in Washington, D.C. was started by President Hayes in 1878. The American Egg Board has been involved since 1976 with the tradition of presenting an artistic painted and sculptured shell egg gift to the President and First Lady. Organizations like the American Egg Board have to submit an exhibit plan to the C3 Production Company and the White House Deputy Director and if accepted they receive an invitation to set up shop on the White House south lawn for the Easter egg event. This was the American Egg Board’s first showing on the south lawn and the “Good Egg” theme was “Hen to Home” that showcased children’s pastimes that included coloring books and chalk activities along with photo opportunities that reminded people of the benefits of eating eggs.

The American Egg Board asked if Big Dutchman would like to display our cage-free unit with our Hollywood Hens as the means to promote questions and answers about egg production and animal welfare.  As it turned out the Hollywood Hens were a favorite with the children as many thought they were real live hens as they held the chickens for photo ops. Over 35,000 people attended this event where the President and First Lady spoke to the crowd and participated in the annual egg roll on the front lawn of the White House.   The American Egg Board is reporting that the First Lady Michelle Obama was very pleased with our cage-free hen’s exhibit.  The White House Deputy Director and the President of the C3 Production Company made many positive comments to the President of the American Egg Board, Joanne Ivy, about our exhibit.  It was the open air view of the Hollywood Hens that drew interest from the people as they entered the south lawn area.

Most of the people thought these hens were alive and could hardly believe they were just fake chickens until they entered our exhibit space and had the opportunity to see them up close. People actually waited in line for more than 20 minutes to see the chickens, and this line was pretty consistent from 7:30 in the morning to 6:30 in the evening. The on-site American Egg Board crew put in 11 hours of continuous work at the show. It is estimated that over 17,000 children and adults visited the American Egg Board booth activity site within this 11 hour period.

Big Dutchman has been an active member of the American Egg Board organization for many years and I’ve served as the Allied Industry Adviser for over 15 years.  All egg production companies in the USA belong to the American Egg Board organization and their Board of Directors is made up of 36 egg producer members who serve for two year terms and 3 Allied Industry Members. The American Egg Board continually looks for ways to educate the general public about layer hen production and having the Hollywood Hen display at the Washington, D.C. event helped bring this message across to many people. For BD the exposure continues to remind the industry who the manufacturing leader is in the cage-free market segment as we currently enjoy a large market share position. The consumer market continues to move towards buying more cage-free type eggs which allows our customers to move in this direction of buying more cage-free equipment. Being an active member of the American Egg Board organization and having them ask us to be involved in this Good Egg project helps promote our position in the market place and continues to strengthen our position with our customers. Terry Pollard Senior VP, Egg Systems USA & Canada