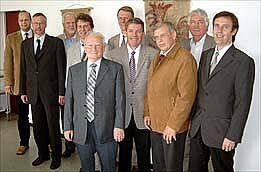 The Livestock Farming Suppliers Association (LSA) was founded on June 11, 2004 as a subdivision of the “BFL” (“Bauförderung Landwirtschaft e.V.”). More than 100 companies from five different countries have already joined this internationally active association.

The LSA sees itself as an economic and political representative for manufacturers and trading companies in the farm supplies business. Many well-known companies that supply products and services for cattle, pig and poultry production are members. The LSA was founded with the objective of representing as many companies as possible.

The economic and political responsibilities of the LSA cover legal, economic and technical issues. So key elements of the LSA's work will be a joint policy on trade fairs, the implementation of standards, as well as support for the development and application of methods of keeping animals in ways appropriate to their species.

At its foundation meeting in Vechta, Germany, the LSA elected Magnus Westerkamp, President of HOWEMA, as spokesperson. According to Westerkamp, priority should be given to an active policy on trade fairs and international membership recruitment.

caption:
The LSA advisory committee with its newly elected spokesperson Magnus Westerkamp (r.) at the constitutive meeting in Vechta, Germany
Back