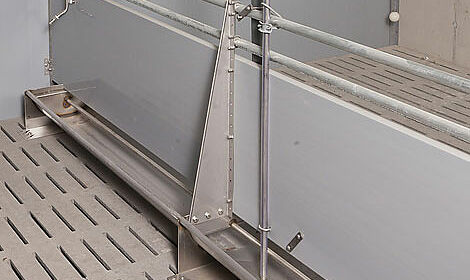 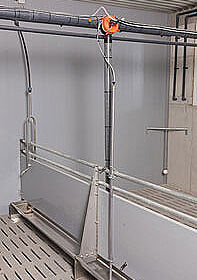 Traditional trough sensors for liquid feeding in pig production recognise only two states: the trough is full or the trough is empty. With LevelCheck, Big Dutchman now introduces an innovative sensor which precisely determines the trough capacitive levels at any time so that additional amounts of feed can now be mixed and discharged in small, fresh portions more reliably and more precisely than ever before.

Problematic reserve feeding times are therefore a thing of the past. In addition to the much improved trough hygiene, the pig producer can also profit from an improved feed intake of his pigs as he is now able to always provide the right amount of fresh liquid feed in small portions. LevelCheck furthermore determines the feeding speed during every meal. The computer automatically processes and graphically displays the data so that abnormal deviations in the pigs' feed intake and therefore possible illnesses can be detected more easily.

LevelCheck is based on the new principle of pneumatic capacitive level measurement. With this type of measurement, slightly pressurized air is blown through the sensor tube directly onto the remaining liquid feed in the trough.