Poultry systems are a model for American egg industry

The Hy-Line representatives from the USA convinced themselves of the know-how regarding poultry houses of the world-wide market leader Big Dutchman. The visitors were particularly interested in layer... 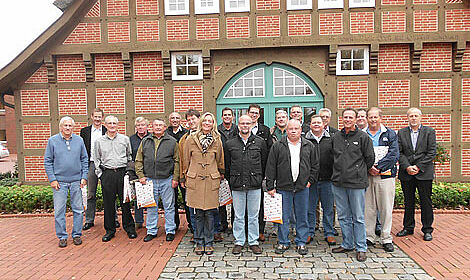 The Hy-Line representatives from the USA convinced themselves of the know-how regarding poultry houses of the world-wide market leader Big Dutchman. The visitors were particularly interested in layer...

German poultry housing systems for layers are forerunners for US agriculture. This became apparent upon the trip of 16 representatives of the layer breeder company Hy-Line to Big Dutchman in Calveslage. Hy-Line is a subsidiary company of the German company Lohmann Tierzucht in Cuxhaven which holds a market share of 80 percent in the US.

“In the coming years our technology will even continue to spread widely in the US “, predicts Big Dutchman managing director Bernd Kuhlencord. The situation in the United States can be compared to that in Europe approx. five years ago. Layer management in cages is still widely allowed, but some states as for example California have already banned it. Others are already working on cage ban. Therefore, many egg producers today focus on enriched cages. Their examples are the enriched colony systems designed by Big Dutchman according to the EU directive.

This example of enriched colony systems combines numerous suggestions for improvement of egg production from scientists and animal welfare activists which have been put into practice at the world-wide market leader Big Dutchman: Larger bird groups, additional perches at a higher position, larger nest surface as well as brighter and larger litter surface are characteristic for this type of layer management.

Besides enriched colony systems, the US visitors showed strong interest also in free range and floor management. Both are also experiencing an upswing in the US, says Bernd Kuhlencord. This way, the Hy-Line representatives found their way to the layer houses in the rural district of Vechta with its alternative systems for layer management.