Equipment for the farm’s own production of high-quality feed mixes. From left to right: mill, mixer, silos for mixed feed and HYDROMIX liquid feeding tanks 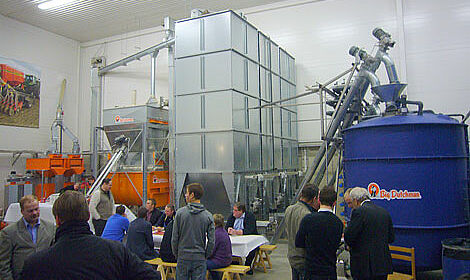 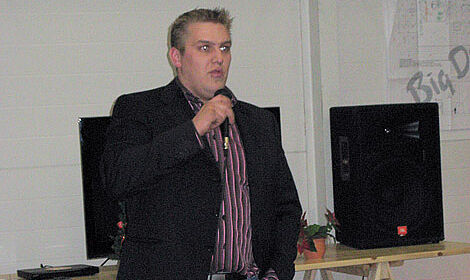 The mineral containers, temporarily converted to a buffet 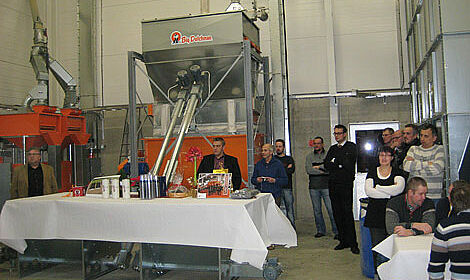 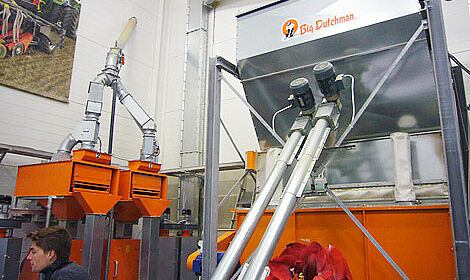 The expression “service room” takes on a completely new meaning on the occasion of the open day at Jonas Hulden’s farm. 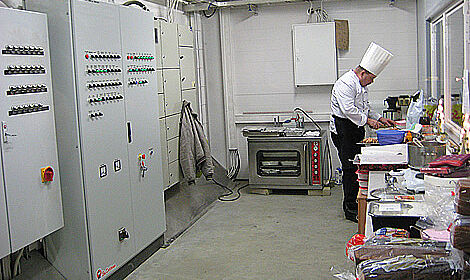 Equipment for the farm’s own production of high-quality feed mixes. From left to right: mill, mixer, silos for mixed feed and HYDROMIX liquid feeding tanks

The mineral containers, temporarily converted to a buffet

The expression “service room” takes on a completely new meaning on the occasion of the open day at Jonas Hulden’s farm.

Jonas Hulden of Nedervetil in Finland has decided to produce his own feed mixes at his farm. He farms an area of approximately 300 hectares, located 500 km north-west of Helsinki, and fattens 700 bulls as well as 4,000 finishing pigs. There are further plans to expand facilities to provide for 6,000 finishing pig places. Thus two important conditions for preparing high-quality feed mixes at a favourable price are already fulfilled at his farm: He has sufficient home-grown cereals as well as a high requirement for feedstuffs. His latest acquisition is therefore a computer-controlled milling and mixing system from Big Dutchman. Inauguration of the project, including a liquid feeding system, was celebrated recently in grand style on the occasion of an open day at the farm.

“The technology is impressive“ was the unanimous response of the guests invited to the event after viewing the large plant which has the capacity to produce up to 4.5 tons ready-mixed feed per hour. The Big Dutchman sales partner for this area in Finland, Markus Björklund, was responsible for delivery and assembly of the system. The extensive delivery programme includes eight silos for the feed ingredients, the entire conveyor technology, two hammer mills, each with a performance of 22 kW, as well as the sifting units for grain cleaning.

Mineral containers for premixes and other feed supplements, a 2000-liter mixer and three silos for mixed feed are also included in the equipment. The guests were particularly interested in the innovative mixer pre-bin: This pre-bin, which was recently awarded two novelty stars at the leading agricultural fair in Denmark, Agromek, enables a significantly higher mixing capacity. The complete feed silos have a capacity of 8.70 m3. Two silos are used for keeping supplies of pig feed and a third is used for storing bull feed.

HYDROMIX liquid feeding: Sometimes it pays to be different

In addition to the milling and mixing technology, Jonas Hulden has also decided in favour of installing the computer-controlled HYDROMIX from Big Dutchman as a brand new liquid feeding system. In normal cases this name stands for reliable feeding technology, which is applied exclusively in the context of pig-management. There are, however, other possibilities, as we can see in the Hulden example: According to the motto “What is good for pigs cannot be bad for cattle either”, the farmer decided also to feed his 700 bulls with HYDROMIX. Accordingly he had one tank installed for pig feed and one for bull feed.