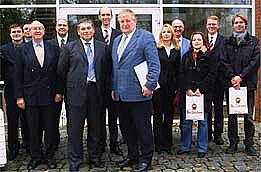 Lower Saxony's Minister of Agriculture Hans-Heinrich Ehlen and his Russian colleague Michail Antonow from Perm, recently visited the Big Dutchman headquarters in Vechta-Germany. As part of an informational tour to several local farms and agricultural organizations, Minister Ehlen joined the Russian delegation from Lower Saxony’s partner province on their trip to Calveslage to visit the facilities of the world leader for housing equipment.

Together with Michail Antonow, he and Josef and Bernd Meerpohl, as well as Big Dutchman managing directors Marco Dreyer and Dieter Hempelmann and member of the board Uwe Heider discussed the possibilities for cooperation between Lower Saxony and the Perm region, as such a cooperation also involves the promotion of contacts between industrial businesses in both regions.

“We know our way around Perm”, the managers from Calveslage were able to say, as Big Dutchman has already been active in this region for more than 10 years. “We have worked on several farm projects there and are always open for good ideas that promote a fruitful cooperation.” Of course, Michail Antonow, who is not only responsible for agriculture and developement of Perm’s rural areas, but who is also its deputy governor, was very pleased to hear this. He campaigned for further investments in his home region, which is regarded as one of the biggest economically developed areas in Russia.
Photo: Two high-ranking delegations collected information at the Big Dutchman headquarters. In front: Lower Saxony’s Minister of Agriculture Hans-Heinrich Ehlen (centre) and Michail Antonov (5th from the left), political colleague and deputy governor of Perm, Russia.
Back