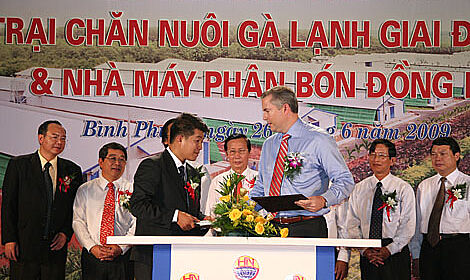 "We would like to congratulate Mr.Vu Manh Hung on this auspicious occasion. We are honored that we have once again been selected by the CP Group as their trusted partner and we are glad that we had the chance to further strengthen our relationship in this major project. The successful completion of the project, totaling 18 broiler houses, is a true milestone for Vietnam, being the first modern farm of this scale” Mr. Brian McCawly commented on the new facility.

The official part of the event was completed with speeches from a list of speakers and dignitaries, followed by a signing ceremony between Hung Farm and Big Dutchman. Hung Farm which is projected to produce broiler, layer and pigs was then officially opened with a formal ribbon-cutting ceremony after which the guests enjoyed self-guided tours of the premises and equipment demonstrations.
Back