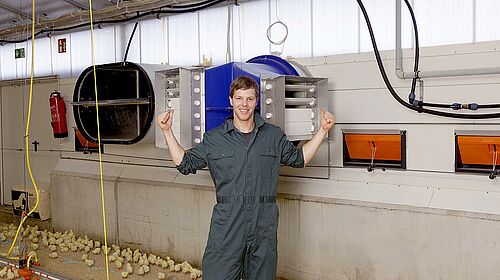 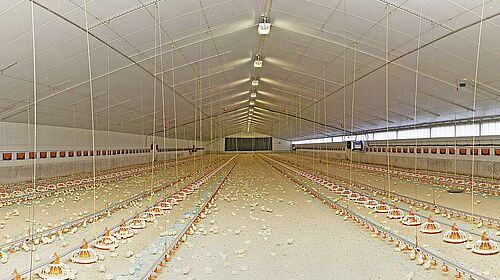 Saving energy is an important topic for livestock farmers today, especially in broiler production. Apart from good insulation, the correct heating system and an individual ventilation concept, recovering heat from the used house air can enormously help with cutting down on energy costs. One of the most costly factors: heating.

Using a heat exchanger, which transfers thermal energy from one material flow to the next, can therefore be a sensible investment. The heat exchanger's effect is doubled when production results also improve.

The poultry equipment supplier Big Dutchman from Vechta-Calveslage was looking for a final answer to above question. With this objective in mind, Big Dutchman searched for a farmers with two identical houses.Stefan Raming-Freesen, broiler producer from the Emsland district in Germany, met this requirement. He agreed to produce with heat exchanger in one of the two houses while switching off the exchanger in the other house, for a total of eight batches.

However, Raming-Freesen had one condition: He asked for a compensation for the additional expenses he would incur due to increased consumption of gas in the barn without heat exchanger. Big Dutchman accepted.

Data on feed consumption, bird growth and mortality were recorded for this time period. At this point, heating costs were not the focus.

This changed abruptly on 20 July 2015, when Big Dutchman received an invoice from Stefan Raming-Freesen, asking to credit his account with an amount of €8,908, and that he would be happy to answer any questions. Big Dutchman made use of this offer and requested a listing detailing the gas consumption.

Table 1: Gas consumption over the period of the experiment (8 batches)
One kWh costs 4.128 cents. HE = heat exchanger

But what was the effect on the production results? Evaluating the eight batches with an average grow-out duration of 38.3 days showed that ventilation increased in the barn with heat exchanger, i.e. the CO2 concentration was lower. This improved the house climate, leading to an enhanced performance of the birds. Mortality tended to be lower, though bird losses were generally very low in both houses (table 2).

Feed conversion improved as well. In addition to energy savings of up to €9,000 per year, saving a similar amount of money for feed seems possible as well.

How the heat exchanger works

The heat exchanger "Earny" used for this experiment is a cross-flow heat exchanger. This means that warm house air and cold fresh air simultaneously pass through an exchanger element without mixing. The exchanger element is made of aluminium and has a ruffled structure, thus guaranteeing a high average heat transfer rate of 60 %. Accordingly, approximately 60 % of the heat are transferred from the exhaust air to the fresh air (DLG test report 6140 F).

A filter unit ensures that the exhaust air is cleaned before it enters the heat exchanger, achieving a separation rate of dust of up to 99 %. There is thus no danger of a drop in performance of the heat exchanger during the grow-out. The filter cartridges are cleaned fully automatically by pressurised air, which ensures continued performance. It is also essential that the warm fresh air enter the house directly to avoid heat losses caused by long pipes.

Big Dutchman supplies the "Earny" heat exchanger ready for installation, which keeps mounting efforts to an absolute minimum. A concrete base, a drain for waste water and electricity: That's all that is needed. If the heat exchanger is retrofitted, two short pipes for the exhaust air and the warmed fresh air must be installed to bridge the distance to the house. The entire system is controlled by the climate computer in the barn. Investment makes sense for broiler production

Stefan Raming-Freesen saved €8,908 in heating costs within just one year. Minus the additional energy costs for operating the heat exchanger, this investment amortized within five years. Both poultry houses achieved good results regarding mortality and feed conversion, with results being even better in the house equipped with the heat exchanger. Carcass quality did not differ much and was very good for both houses with a rejection rate of only 0.8 %.

Broiler production with Earny: This video shows how the heat exchanger works.