Poultry house for organic egg production: everything is ready for the layers 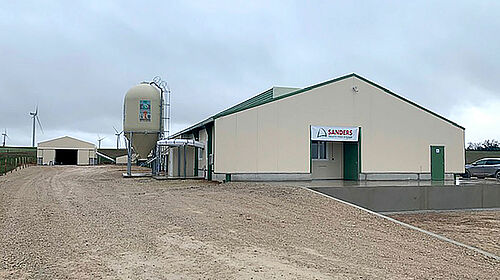 Poultry house for organic egg production: everything is ready for the layers

In France, the popularity of organic eggs is increasing. Nicolas Porcherot from Poiseul-la-Ville-et-Laperrière reacted to this trend and recently expanded his family-owned agricultural company EARL Bioproche by adding a barn for organic egg production. The new barn is located near Dijon in the department Côte-d’Or and has a wintergarden and an open run for the hens. Porcherot elected to equip his new poultry house with the animal-friendly Big Dutchman aviary system Natura Nova 270. Around 300 visitors were interested in the impressive project when he extended an invitation for an Open House.

Hens who want to leave the barn can go outside.

Nicolas Porcherot took his decision in favour of Natura Nova 270 after visiting a colleague’s farm in the department Haute-Savoie, whose egg production concept convinced him.

The aviary consists of one level and two nest rows and perfectly unites welfare with profitability. The new poultry house is also equipped with a stereo system and a surveillance camera, which allows remote control via the internet even from outside of the barn.

100 million bird places – an anniversary for the Natura aviary system

Natura Nova 270 is one of the more than 20 members of the Natura family, which celebrates a very special anniversary these days: to date, 100 million bird places the world over have been equipped with this aviary system that is considered to be especially animal-friendly!