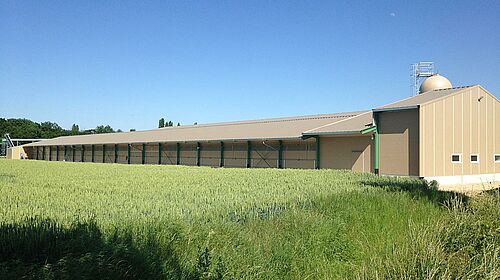 An impressive sight: the aviary from above 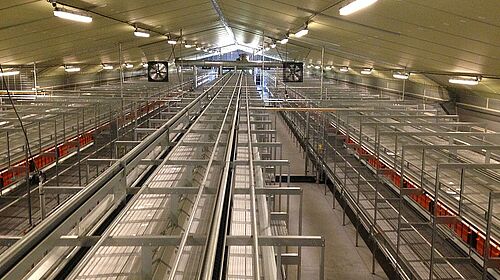 An impressive sight: the aviary from above

Most French consumers eat eggs that were produced in enriched colony systems. However, their second favourite egg is the one laid by free-range chickens. Cyril Galles from Lescout in south-western France recently accommodated this fact by building a new poultry house for free range egg production with 20,840 layers. The new barn is equipped with a Big Dutchman aviary.

NaturaStep is one of the more than 20 members of the Big Dutchman product family Natura. The aviary, which has been developed for barn egg production and free range egg production, can be installed in single rows thanks to a "stepped" design. This design allows laying hens to move from one level to the next without leaving the system. The integrated nests are thus easy to reach. Hens therefore use the nests instead of laying on the floor. The entire system can be viewed from the aisle. Farmers know how important this detail is, for it significantly facilitates inspection.

Aviary systems are new to the Galles farm. However, egg production is a traditional source of income for the family: Cyril Galles' father kept laying hens, and his son now manages four barns, housing a total of 180,000 birds. The producers' association "L'Œuf de nos Villages" markets part of the eggs, and Galles sells the rest himself.

The French consumed 216 eggs per person in 2014, which is only 15 eggs less than their German neighbours. However, there is a difference regarding the source of the eggs. 70 % of the eggs eaten by the French were produced in enriched colony systems, and 17 % were laid by hens kept in free range egg production systems. The German neighbours prefer eggs from barn egg production systems, with a market share of 62.4 %. Only eleven percent of eggs consumed in Germany are laid in enriched colony systems.

The Galles farm reflects these French customs: Three of its four poultry houses are equipped with enriched colony systems, while the Big Dutchman aviary is installed in the fourth one. A hen run along the sides of the house allows the birds to leave the barn.

It was not a coincidence that poultry manager Galles selected a system by the German poultry equipment supplier Big Dutchman. The family-owned company from Vechta has been selling alternative poultry management systems since the early 1980s. More than 52 million bird places have been equipped with Natura systems over the years, first in Europe and then also in the US.

This impressive number has added up thanks to the very beginnings of alternative poultry management: Right from the start, Big Dutchman understood that the correct overall concept is the key for economically viable aviary systems. The structure of the aviary (feed and water supply, nests), ventilation, lighting and management are therefore essential criteria during the planning phase.

Just like the market, the product range has also grown. Over the years, the Natura systems were modified to meet the requirements of both the market and the customers. Today, there are concepts for virtually any situation. Whether the barn is new or old, whether the manager selects organic, barn egg or free range egg production, whether the barn has a high or extremely low ceiling – Big Dutchman can guarantee a flexible solution with high stocking densities.