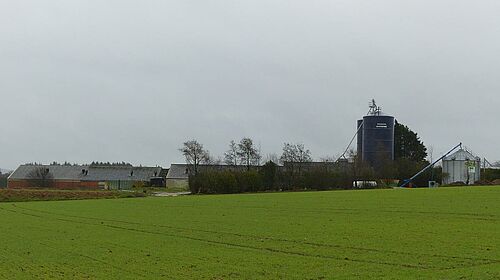 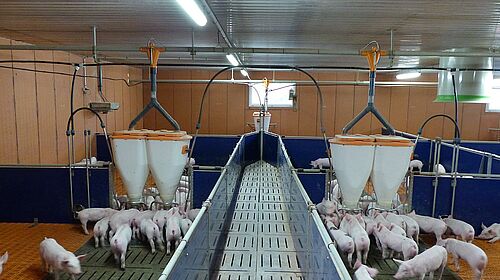 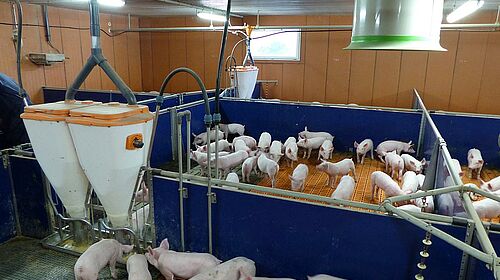 The PigNic Jumbo feeder is well received by the piglets, as documented by daily weight gains of 538 grams. 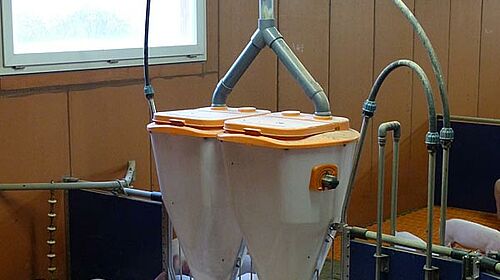 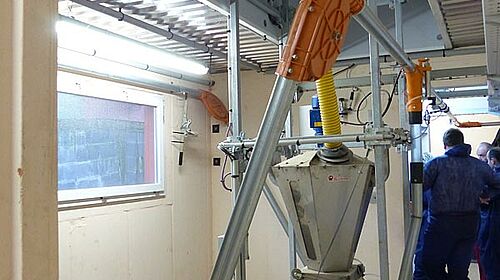 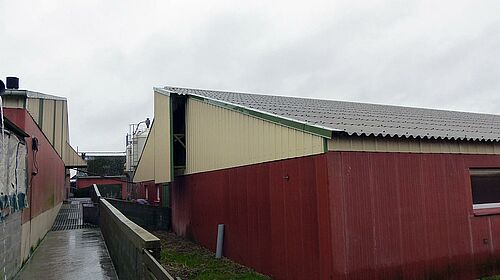 In the eyes of Xavier Berthou (left) and Sébastien Cueff, distributor of Big Dutchman equipment in Brittany, their cooperation was very successful once again

The PigNic Jumbo feeder is well received by the piglets, as documented by daily weight gains of 538 grams.

In the eyes of Xavier Berthou (left) and Sébastien Cueff, distributor of Big Dutchman equipment in Brittany, their cooperation was very successful once again

Big Dutchman pig equipment and feeding systems are used on pig farms in more than 100 countries on all five continents. Naturally, this includes the "End of the Earth", and for good reason: French department no. 29, Finistère, derives its name from the Latin "Finis Terrae" and is the westernmost corner of Brittany, i.e. right where France drops into the Atlantic Ocean. It has much agricultural potential and the economy is mainly focused on livestock farming.

Finistère is exemplary for all of Brittany, as this north-western department is one of the main animal husbandry regions of France. Pig production is especially popular; sixty percent of  France's 1.1 million breeding sows live in Brittany.

Xavier Berthou keeps 400 sows on his family farm in Saint-Thonan, producing piglets in a closed system. He weans 14.7 piglets per sow with a lactation period of 28 days. The limited agricultural company of Mr. Berthou, operating under the name EARL du Cosquer, has a surface of 140 hectares and is managed by himself, two other family members and three employees. One more employee works part-time. Mr. Berthou is very proud of his staff, and his team enjoy working for him, as evidenced by his last new employee – hired some 16 years ago.

Pig feeding systems at the "End of the Earth": Dry feeding with DryExactpro

Mr. Berthou already used Big Dutchman systems when he equipped the gestation area on his farm some years ago. This decision must have been a good one: He chose to use pig equipment and feeding systems from the world market leader again for the extension of this farm. In the new nursery, 1,600 piglets receive their feed via the DryExactpro dry feeding system.

The pig house management software is called BigFarmNet. This innovative Big Dutchman technology ensures that all controllers, computers and sensors in the house communicate. A single program manages all tasks on the farm. "The system is a real added value," states the satisfied producer.

Both planning and on-site implementation of the project were carried out to Mr. Berthou's perfect satisfaction. "I was given very good advice and Big Dutchman was a very reliable partner at all times," praises Mr. Berthou. He was especially happy that all his requests were catered for very flexibly. Responsible for installation of the equipment was Big Dutchman distributor SARL Cueff in Brittany.

At a weight of seven kilograms, the piglets are moved into the new nursery. When they weigh 45 kilograms, they enter the finishing house. Feed is dispensed from the Big Dutchman PigNic Jumbo feeder and is, in the most part, produced locally. Mr. Berthou grows about 95 percent of the feed on his own farm and only buys special premixes and vitamins.

Multiphase feeding is the usual practice in French rearing and finishing pig houses, and Mr. Berthou is no exception. The pig producer feeds three different components and the premixes, blending them as necessary depending on age and weight of the pigs. Daily weight gains are therefore at an admirable average of 538 grams. The pigs receive their feed in three feeding periods per day. The pig feeding system runs daily for approximately 2.5 hours.

Mr. Berthou is very happy with the relatively low building costs – the willingness of his team to help during construction really paid off, as did Mr. Berthou's active involvement in the planning. However, the extension of the farm is not yet complete. Next in line is the conveying technology of the milling and mixing system. Mr. Berthou's long-term goal is to make the farm more efficient and to continuously optimise operation.

The new pig house is equipped with the Big Dutchman DiffAir ceiling for spray cooling. This ceiling also serves as diffuse fresh air system and as cost-efficient insulation of the ceiling. Each compartment is furthermore equipped with an exhaust air chimney. The slats in the nursery as well as the housing system were also supplied by Big Dutchman.

Mr. Berthou has been very content with the health status of his pigs, which has improved since he started using the new house: The transmission of diseases has been stopped and diseases are less common overall. The slurry removal also works well; an important topic in Brittany, as the nutrient content in north-western France is very high due to the high density of livestock. Accumulating residues are therefore treated in a central separation and drying system and then transported to other parts of the country.