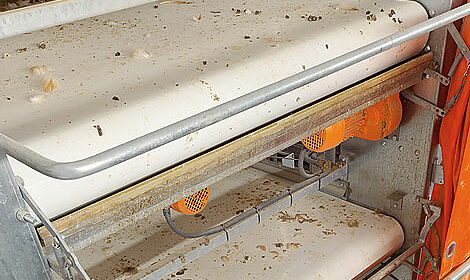 At EuroTier 2012 Big Dutchman introduces the first system for automatic belt monitoring and control of manure belts in layer houses. This manure removal innovation is very animal-friendly, saves working time and reduces the wear of the transport belts. Sensors laterally attached to the manure belt recognise deviations in the belt run and initiate compensating adjustments in due time. In case of extreme deviations, the system is brought into a safe position. The new monitoring and control system can be used for all types of housing.

Up until today it has been common practice to monitor and adjust the manure belts manually at regular intervals. Depending on the barn size, these manual adjustments are often very labour-intensive and will not be required any more with the automatic manure belt control. Thanks to the independent re-adjustments there is also much less damage to the belts. This increases service life of the belts and reduces repair costs. The latter also influences the welfare of the birds, as defective manure belts often have to be replaced during the laying period which is very stressful for the animals.

The Big Dutchman innovation was awarded a silver EuroTier Innovation Medal by an international expert commission of the “DLG” (German Agricultural Society)  in the forefront of the show.