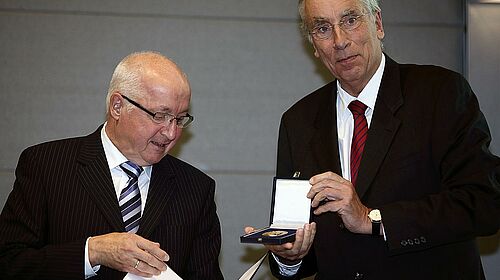 Engineer August Wienken (Dipl.-Ing.) from Vechta, Germany, was awarded the Max Eyth medal by the Association of German Engineers (VDI) at the International Poultry Event, which took place at the Convention Center (CC) on the exhibition grounds in Hanover on 10 November 2014, the eve of EuroTier. The medal was awarded to recognise Wienken's outstanding contributions to the development of modern poultry equipment. His technical improvements significantly helped increasing economic efficiency and poultry welfare.

Dr. Michael Quinckhardt, member of the VDI technical division Max Eyth Society for Agricultural Engineering, presented Wienken with certificate and medal. In his laudatory speech, he pointed out that Wienken's designs had influenced the competition and thus set standards for poultry production facilities worldwide. Wienken studied Mechanical Engineering at the Technical University of Hanover, focusing on production and manufacturing engineering. After completing his studies, he was first employed by Massey-Ferguson-Hanomag Inv. & Co. in Hanover and worked in the test department for component parts, gears and hydraulics. From 1 April 1977, Wienken worked for the poultry equipment supplier Big Dutchman in Vechta. He held different executive positions in the product development department and retired in 2013 as technical director. He still offers his comprehensive experience to Big Dutchman today, though with a greatly reduced number of working hours.

Wienken not only significantly contributed to the development of traditional egg production systems but also strongly influenced the novel enriched colony systems, which have replaced poultry cages in the European Union. Today's animal-friendly housing systems were first developed in the 90s. The main goal then was to preserve economic standards even with higher production costs, while at the same time meeting the new statutory provisions regarding animal welfare. Wienken played an important role in these improvements.

The Max Eyth medal was established in 1950 by the Max Eyth Society for Agricultural Engineering. It recognises outstanding individual achievements which contribute to the history of agritechnical development.