Bahrain: General Poultry Company prepares for the future with poultry equipment from Germany

Happy faces after signing of the contract in January. 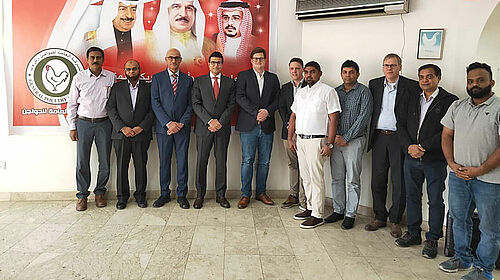 Happy faces after signing of the contract in January.

The egg producer General Poultry Company (GPC) from Hamala in the north-west of Bahrain has been devoted to supplying the Kingdom of Bahrain with healthy food for the past 40 years. To ensure that this remains true for the future, the company recently commissioned German poultry equipment supplier Big Dutchman at the beginning of the year with the erection and equipment of eight modern new barns for egg production. The new buildings will successively replace the older ones, whose equipment was also purchased from world market leader Big Dutchman 40 years ago. In the medium term, GPC plans a vertical integration with the potential of opening up new markets.

The turn-key project, for which Big Dutchman will supply not only all equipment for the barns but also the buildings themselves, consists of two houses for pullet rearing with 79,000 birds each, and six layer houses for 75,000 layers each.

The farm is located in Hamala, in the north-west of the country. GPC will put the pullet rearing houses into operation in November 2020, with the start of egg production planned for March 2021. The buildings have been designed in such a way that they can be retrofitted with solar panels and a fully automatic manure drying system.