BigLED is installed inside the Avimax directly above the birds 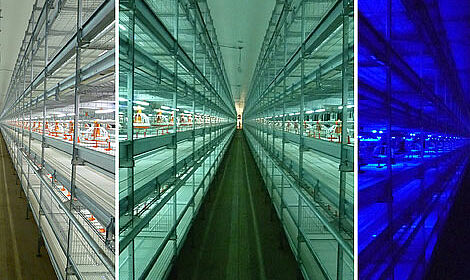 BigLED: Adjusting the lighting in accordance with the spectral sensitivity of the birds as well as their age and needs positively affects health, production or welfare of the flock.

BigLED is installed inside the Avimax directly above the birds

BigLED: Adjusting the lighting in accordance with the spectral sensitivity of the birds as well as their age and needs positively affects health, production or welfare of the flock.

At this year’s EuroTier Big Dutchman introduces a truly impressive innovation: BigLED is the world’s first full-spectrum lighting system for cage-based broiler growing. An increased share of the blue and red light spectrum, which are not within the visible range of humans, make for less stress, a lower mortality rate and a higher growth rate. In comparison with traditional lights, this new light can furthermore help to save up to 90 % of energy. The BigLED light has been developed especially for the Big Dutchman system Avimax. The lights are 0 to 100 % dimmable and are protected against dust and high-pressure wet cleaning.

The innovative light concept is based on the fact that birds perceive a broader light spectrum than humans. For this reason the BigLED operates with an increased share of light from the blue and red spectrum which is invisible to humans but relevant for optimal animal behavior. The BigLED enables poultry producers to control the light intensity - based on the share of red and blue light and in combination with the dimming level - and thus adapt the light to the age and requirements of the birds.

The energy-saving potential of BigLED arises from the adaptation of the spectral light distribution to the bird eye. This makes for a significant increase of the light yield. Furthermore, birds perceive a much higher light intensity than humans. Conclusion: the BigLED allows for maximum light intensity in the poultry house at minimum power consumption.

BigLED is installed inside the Avimax cage directly above the birds. This has several advantages, such as the homogeneous distribution of light which in turn improves the illumination of feed pans and drinker lines for an optimised intake of feed and water. Also very important is the fact that shadows, for example during inspection works in the aisles, are reduced to a minimum. The birds get less frightened and it is much calmer in the house. An integrated moving-out lighting ensures work safety and reduces the stress for the birds.