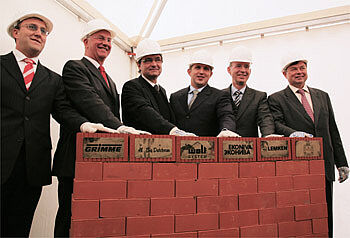 In the presence of the governor of Kaluga, Anatoli Artamonov, and the minister of agriculture Leonid Gromov, a group of five companies from the agro-industry laid the foundation for a technological centre in Detschino. The German manufacturers for agricultural machinery GRIMME and LEMKEN together with the German leading supplier for pig and poultry housing and feeding equipment Big Dutchman and the constructing company Wolf System are going to erect their Russian branch offices on a 45 ha site approx. 130 km southwest of Moscow. The German-Russian dealer for agricultural machinery EkoNiva completes the quintet so that visitors of the centre for agricultural technology will soon be able to get a good overview of the most up-to-date products of the industry.

In his speech, Gouverneur Artamonov stressed the importance of the agricultural industry for the economic growth of the Kaluga region and Russia as a whole. He thanked the investors for their commitment and their contribution to the further development of Kaluga as a high-tech region. As spokesperson for the companies involved, Dr. von Busse, managing director of LEMKEN, announced that 100 jobs will be created already during the first construction stage of the unique centre in Russia. The overall investments of initially more than 20 million euros will be the basis for the construction of modern assembly and production facilities.

The five companies are planning to open their distribution and service centres as well as their show rooms for technical equipment by summer of next year with the goal to serve the entire Russian market from Detschino. Since the centre of agricultural technology is located in close proximity to the central agricultural school of the Kaluga region, the companies have an excellent opportunity to recruit qualified new staff also thanks to the close cooperation with the school regarding technical and practical training.
Back