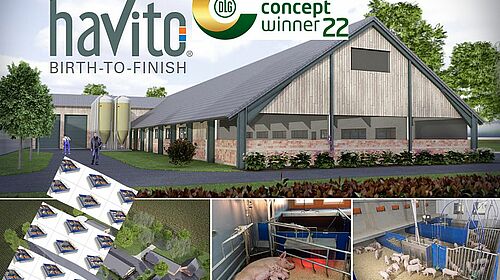 The Havito birth-to-finish pig housing concept has been named DLG Agrifuture Concept Winner 2022 during the EuroTier show. In the Havito system, a joint development of Big Dutchman and Bröring Pig Partner, the pigs remain in the same structured pen in which they were born for the entire rearing and finishing period without being relocated. With its future award, the German Agricultural Society (DLG) honours visionary and pioneering agriculture concepts that have good chances of being realised.

Expressing his happiness about the award, Big Dutchman CEO Bernd Meerpohl said: “We have been working very hard on combining animal welfare with practicality in our products. Havito birth-to-finish is a smart response to the challenges of pig production that takes animal and common welfare into account while also being a working solution for the industry. I would like to thank everyone who worked on this project.” A team consisting of Sigrid Seelhorst, head of Bröring’s pig division, Daniel Holling, Director Global Support for Big Dutchman, and Stefan Harpenau, manager of the Havito future research farm in Dinklage, is in charge of this concept for the future. “We want the Havito concept to be a feasible alternative for farmers who are looking for the future of pig farming,” explains Heiner Bröring Sr., who significantly contributed to the system’s idea and development.

The Havito birth-to-finish housing concept’s starting point is the PigT pig toilet, which was introduced in 2018 for rearing and finishing and which has now been extended to include sow management. Since the entire surface of the pen is closed and urine and faeces are separated continuously, the whole pen can be covered with organic bedding material. The pigs structure the pen themselves, creating a lying area, an activity area and an area for defecating.

Havito birth-to-finish is designed for a 21-week production rhythm, comprising farrowing, a 5-week or 6-week suckling period and 15 weeks of rearing/finishing, followed by slaughter. The piglets born in the pen remain there throughout their entire lives; their increasing space requirements are accounted for. The sow always gives birth in the same barn. The piglets learn from their mother how to find feed, and the eating space does not change. Elements that are required for the piglets’ birth in the open farrowing pens can be folded up during rearing.

The planned production rhythm reduces the time required for a batch. This compensates the additional space necessary for the concept so the farmer is still able to produce profitably.

The Havito birth-to-finish concept is the first structured pen in which the piglets are born and in which they remain for the entire rearing and finishing period without being moved.