The system is a further development based on the Big Dutchman exhaust air washer "MagixX-Pig", which had already been certified according to the "Cloppenburg guidelines". The packing of the chemical stages is sprinkled continuously with wash water of pH < 4 to separate both dust and ammonia. The receiving side of the first filter stage is also periodically sprayed with wash water. In the third stage, the exhaust air is forced through a root timber packing and thus cleared of odorous substances.

The SignumTest is the DLG's comprehensive usability test according to independent and recognised evaluation criteria for agricultural engineering products. The test evaluates the essential product characteristics in a neutral manner – from efficiency and animal-welfare aspects to durability, workplace safety and functional reliability. Test rigs and a variety of operating conditions are used to test and evaluate both these aspects and the test object's successful operation in a field trial at a real-life farm.

The exact testing conditions and methods, as well as the evaluation of the test results, are defined by the relevant independent testing boards in corresponding testing frameworks and constantly adapted to the recognised state of the art, as well as to scientific findings and agricultural requirements. The tests are performed according to methods that permit objective assessment based on reproducible values. A successful test concludes with the publication of a test report and the awarding of a test mark.

This DLG SignumTest tested the exhaust air treatment system from the company Big Dutchman Pig Equipment GmbH with respect to its suitability for reducing dust, ammonia and odour emissions in the flow of exhaust air from litterless pig houses with extraction above the floor. The basis for the test is a ventilation system designed according to DIN 18910 that conforms to the described process parameters for ammonia and dust separation of at least 70 percent in each case. A value of 300 OU/m³ must not be exceeded in the exhaust air washer's emissions, and there must additionally be no perceptible smell of untreated gas in the clean gas. 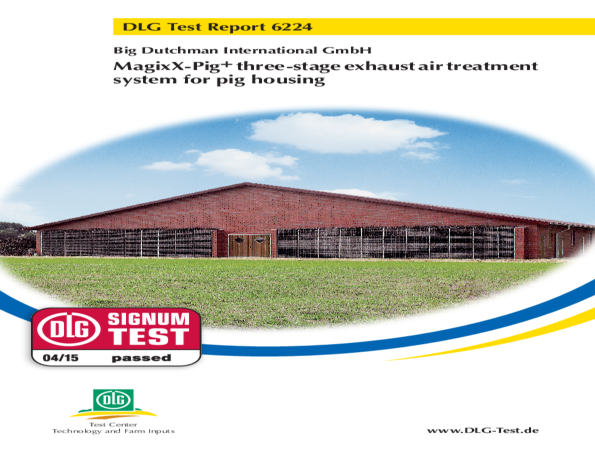