Market insights and technologies in the field of welfare farming of laying hens, broilers and pigs 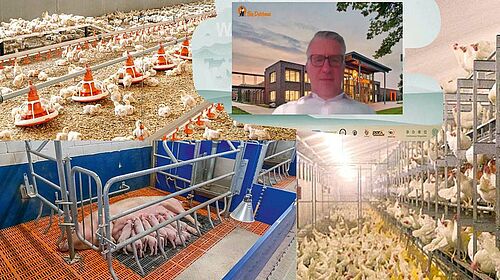 The 2022 World Conference on Farm Animal Welfare and Food Health, co-hosted by the Food and Agriculture Organization of the United Nations (FAO) and the China Association for the Promotion of International Cooperation in Agriculture (CAPIAC), was recently held online. Representatives from the Chinese government, international institutions, embassies of many countries in China, academia and livestock enterprises gathered in the live broadcast room to talk about "One Welfare, One Health". Walter Benz, president of Big Dutchman China, was invited to give a keynote speech on "Integrated Solutions of Animal Welfare Farming" at the conference, sharing Big Dutchman’s market insights and technology applications in the field of welfare farming of laying hens, broilers and pigs.

As an important starting point for the sustainable development of green agriculture, animal welfare plays a positive role in promoting livestock and poultry health, improving productivity, reducing the use of antibiotics, ensuring food safety and meeting the health needs of consumers. The concept that "improving animal welfare is an important measure to achieve a harmonious and symbiotic development of humans, animals and the environment" has become a global consensus.

Walter explained in his report that the world's first regulation on layer animal welfare was adopted in the European Union in 1999, which opened the global trend of welfare animal production. At present, European countries and the USA have issued relevant regulations, setting requirements on important indicators such as feeding space and usable area of pens.

For welfare farming of laying hens, alternative systems are the main embodiment. There are three types of alternative systems available, namely nest and slatted floor (traditional non-cage system), aviary systems, and free-range or organic systems. The third type requires a large space in the outdoors. The second one, aviary systems, can meet animal welfare requirements while allowing farmers to have sufficient stock density.

Big Dutchman has been developing aviaries for egg production for more than 30 years. The Natura system meets European and American standards and has helped many farms achieve a win-win situation in animal welfare and farming performance in Europe and the US. As of 2019, more than 100 million laying hen places worldwide have been equipped with the Natura aviary.

The EU and the United States were the first regions to practice animal welfare breeding, and currently, laying hens in alternative system account for 52 % and 34 % respectively of the total laying hens in these regions.

In contrast, the proportion in China is only about 0.1 % (referring to the animal welfare standards in Europe and the US), but the Chinese government supports the transition to welfare production, and public surveys show that Chinese consumers generally approve of this. At present, about 300,000 laying hens are raised on farms equipped with Big Dutchman aviary systems in Shanxi, Hainan, Tibet, Fujian and Tianjin, China.

For welfare farming of broilers, Walter highlighted a broiler resting platform that has been widely used in Europe. The platform can be adapted in different forms according to different requirements of enterprises and local regulations. With a perforated or closed surface, it can be arranged individually or in rows. The platform can be increased in height and equipped with climbing ladders for birds using a suspension system.

In addition, free-standing or suspended perches are available for a large number of boilers. A sand bath box allows broilers to exhibit natural behaviors such as pecking and sand bathing. The nest with litter provides broiler breeders with a comfortable laying environment that complies with welfare regulations.

For welfare farming of pigs, Big Dutchman’s farrowing pens provide a comfortable environment for sows at all times, including climate, feed and water, with more space for sows and piglets to move. The farrowing crate is stable and easy to open and close. The low-rise farrowing pen is easy for sows to get in with a good overview. Due to the large protective space provided for the piglets, piglet loss is similar to that of closed barns.

Big Dutchman's automatic farming system also provides a comfortable environment for pigs at different stages of growth, including good temperatures, clean water and periodic provision of nutritious feed. The system includes a piglet play area that allows the piglets to grow healthily in a safe and warm environment. Entertainment facilities such as toy chains, toy sticks, and hay racks are provided to meet their entertainment needs and improve the welfare level.

Welfare farming is inseparable from digital management. Walter said that as early as in 2010, Big Dutchman was the first to launch a revolutionary farm management software in the industry, BigFarmNet, a complex farm management system for pig and poultry operations. And in 2021, Big Dutchman released BFN Fusion, a digital platform that links the entire farm-to-fork value chain, enabling poultry and pig farms to achieve the most cost-effective animal protein production while ensuring a transparent and safe supply chain.