“Very pleased with the performance of the system so far” 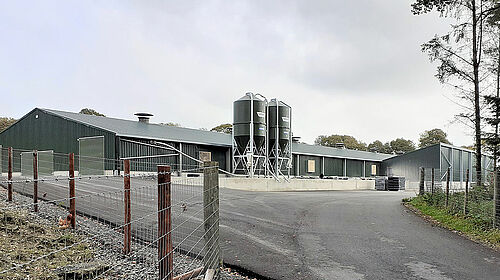 In many regions of the world, permits for poultry houses are only granted on the condition that the exhaust air is cleaned from ammonia, odours and dust. This was also the case when Duncan Davies from Wales wanted to build a second barn for free range egg production last year. For a positive decision, the authorities required Davis to filter 70 % of the ammonia from his barn’s exhaust air. Searching for the best solution, the farmer selected the Big Dutchman air scrubber Pollo L. The scrubber is now in operation and Davis is very pleased with the performance of the system so far, he says in a detailed feature article in the British Ranger magazine.

Published with kind permission of the Ranger. 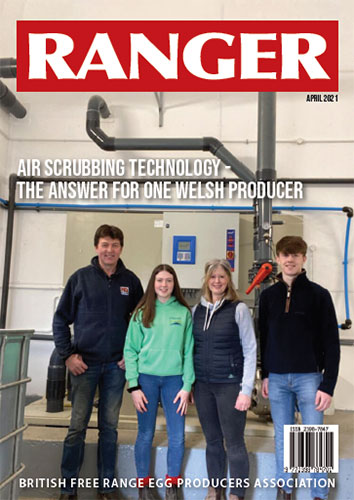 When Duncan Davies took over his family beef and sheep farm near Newtown, in Wales, both he and his wife were having to work full-time jobs away from the farm to make it financially sustainable. They soon realised that in order for them both to return full-time to the farm they needed to find a way of making it it pay.

“With the improvements we needed to make, the figures on the beef and sheep just did not add up for us”, Duncan said. “So, we decided to look for an alternative that would work for the farm and would allow us both to come home”.

With several neighbouring farms having expanded into free range, they thought that the sector could offer an alternative worth exploring.

“We took some advice and had a look around a few other farms, and then from there decided to put in for the planning permission”, Duncan said.

“In 2016 we put up our first shed of 32,000 birds and since then it has gone really well, which led us to expand and put up another shed of the same size last year”.

It was when they went to build their second shed that the Davies’ found that NRW’s* rules around ammonia emissions had got stricter. Whilst their planning permission went through easily, the application for an IPPC (Integrated Pollution and Prevention Control) permit required them to reduce the ammonia in the air emitted from the shed by 70%. 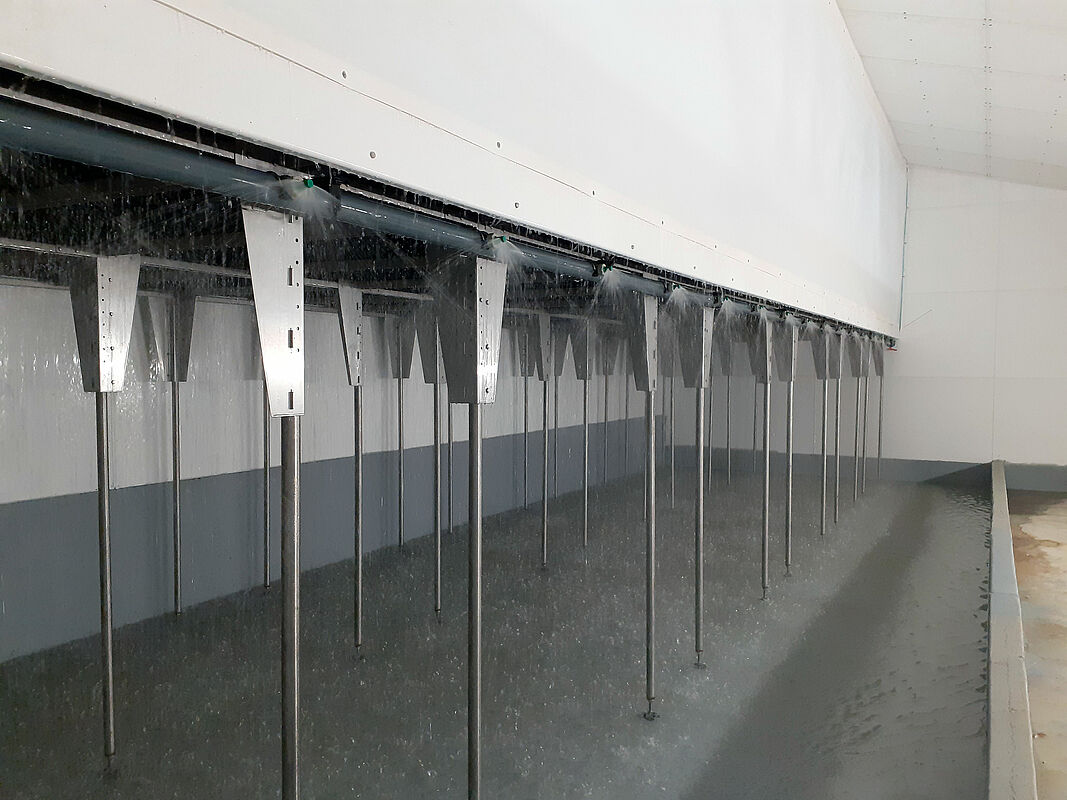 The bottom half of the scrubbing house

These strict requirements meant that Duncan was left looking into air scrubbing technology in order to push ahead with the expansion.

“When we first started looking there was actually quite a limited number of options available, as not many companies had actually fitted one of the scrubbers in the UK. I went to look at one of the Big Dutchman operations, that Newquip supply, and I really liked the simplicity of how it was set up and working”, Duncan said.

In fact, the basic premise of air scrubbing is quite straightforward. The air scrubbing unit is built into the back of the housing and air is drawn into it by the ventilation system. Inside the scrubbing unit is a washing room where the air is washed around with a mixture of water and sulphuric acid which binds with the ammonia particles and neutralises them. The dirty water can then be used as fertiliser and the air leaving the system is clean of ammonia. 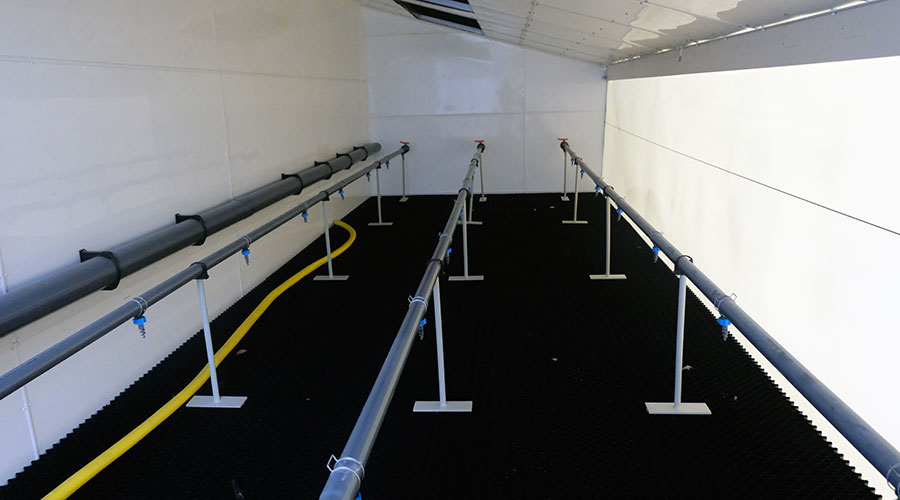 The air scrubber that Duncan decided to install on his farm was the Pollo L model made by Big Dutchman which was supplied by Newquip. This model uses a chemical substrate (sulphuric acid) to neutralise the ammonia, however Big Dutchman do also provide scrubbers that use biological substrates. The company say that they recommend chemical scrubbers for poultry because they are more straightforward to use and create less wash water.

Duncan told us that he has been very pleased with the performance of the system so far.

“It is very efficient.  When the scrubber was fitted, the air coming out of the shed was tested and it had cleared almost 100% of the ammonia”. 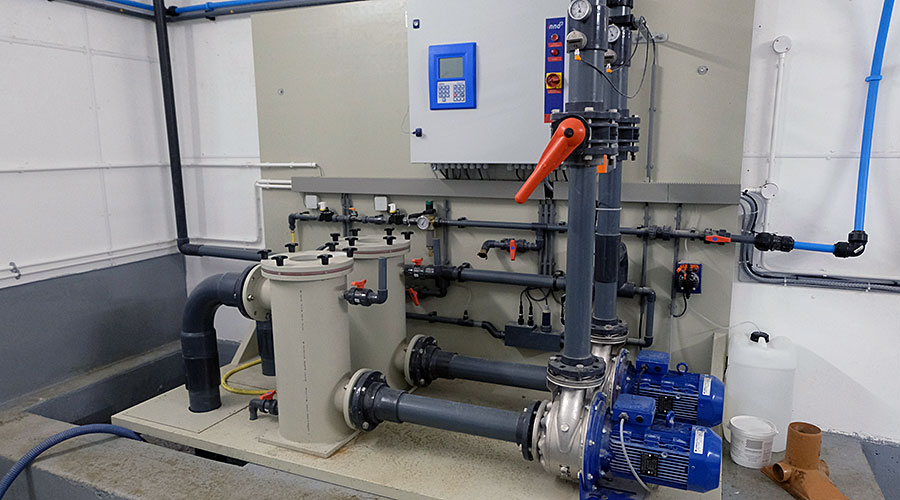 The pumping house which provides the washroom with fresh water

He continued: “It is very easy to maintain. The system self-regulates, measuring pH and ammonia round the clock. When the water is saturated with ammonium dust it senses that, pumps it into the tank, and replaces it with fresh water. The acid gets delivered 1000 litres at a time, and we are still using the first load”.

Installing a scrubber does of course mean additional cost, however, Big Dutchman told us that there is still money to made with a scrubber. A ‘painful pill’ is sometimes needed on route to profitable growth, they said, and they have come up with numbers for a standard UK layer house of 32,000 birds which claim that if typical annual profit is £112,000, with the additional cost of a scrubber it is around the £87,000 mark.

The air scrubber on the Davies’ farm was built in alongside the shed. 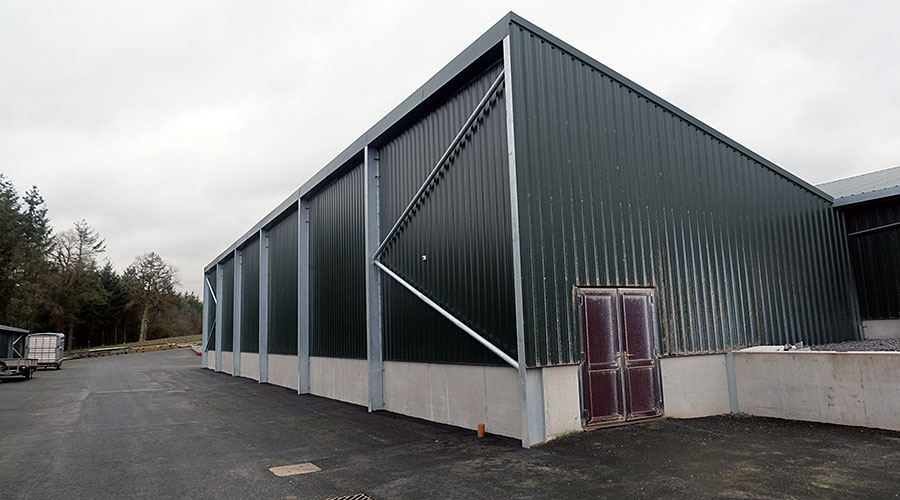 Werner Meckelnborg is Area Sales Manager for Big Dutchman , he said: “The advantage of having a built in system is that it can be built to an exact specification and there is more space, making it easier to maintain, however there is the cost of building it”.

Big Dutchman, as well as competitors Lavamatic and IPT, also offer a modular air scrubber that comes in a box around the size of a shipping container.

Werner said: “We normally recommend the built-in system for poultry because there is a high volume of air to handle, but the modular option is exactly the same system under the skin. A lot of people do not want the added cost of building and the benefit of the modules is that they are built and tested in the factory, then shipped out, plugged in, and running within a day”.

Werner Meckelnborg is based in Germany in his work for Big Dutchman, he told us that air scrubbing is far more commonplace on the continent.

“Around 8-10 years ago air cleaning really took off over here and we have installed around 1500 systems in that time. In both the Netherlands and Germany almost all farms are now using this technology and it is very unusual for a setup to be built without a scrubber now”. 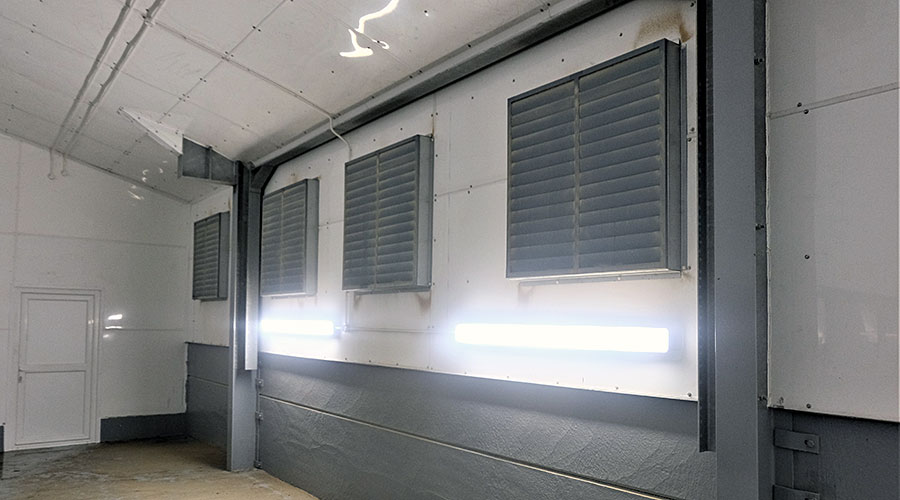 The vent where the cleaned air exits the scrubber

Werner believes that the technology is only going to become more common in the UK and also suggests that it has huge potential because they are able to recover energy that is lost during the washing process and reintroduce it to the production process.

“There is a move towards more environmentally friendly systems in the UK for all animals, air cleaning is one aspect of this, and another is energy capture from the animals. In essence, we can use air scrubbers to gather thermal energy from the animals in winter, and then we use that warm water to treat the air going back into the housing”.